Grosjean not eyeing Ferrari move... yet 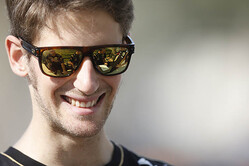 With Valtteri Bottas appearing to have 'missed the boat', many believe that Romain Grosjean could be near the top of Ferrari's shopping list as it considers who to replace Kimi Raikkonen with in 2017.

And whilst denials that Haas will serve as Ferrari's 'B-team' are served up with almost tedious regularity, the Frenchman has said that he does not believe himself to be part of some Maranello masterplan.

"They are certainly going to get all the data, and all the feedback from the engineers," he told Motorsport.com. "The best I can do is to do my best and do my job. I didn't go to Haas to go to Ferrari. That is not the point.

"I went to Haas because I like the project," he insists. "I think it can be successful. It is an American team so there is a big market that will be nice for F1.

"Of course the dream is always to go to Ferrari," he admitted. "Ferrari wants good drivers, and if you be the best you can be, then you have a chance."

The first new team to enter the sport since 2010, the year that saw Hispania, Virgin and Lotus (Caterham) join the grid, Grosjean is convinced Haas will not suffer the same fate as two of those particular projects.

"It is a unique case," he said. "It is a new team without being a new team, because the car should be running, and shouldn't have any big dramas as most of the things come from Ferrari.

"On the operational side we need to get the people to work together and understand the software," he added, "but we have good people coming, and support from Ferrari behind. So there are risks, but I think it can be quite nice."