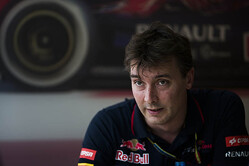 Following a fairly strong season in 2015, considering the engine package available - and the fact that it was running two rookies, albeit two of the best newcomers to grace the sport in some time - Toro Rosso is looking to move up the midfield this year.

However, the engine supply saga that surrounded the Faenza outfit and its sister team for much of the year and wasn't resolved until early December could compromise progress.

"When you've got a tricky engine situation it's always a compromise," technical director James Key told Sky Sports, admitting that ideally details of the engine would have been available almost a year ago. "There is a compromise because you've really got to be optimising your car around what is an incredibly complicated installation of these power units. Back in March is when you're really getting to grips with what you're trying to do.

"So it does compromise from a technical viewpoint. In terms of what the team is doing, I don't think it makes the slightest bit of difference. You simply shuffle plans around accordingly.

"We've got various stages of planning," he added, "there are some really good guys to work on all this stuff, so we've got a lot of very competent production guys and designers who are working hard to make sure that we're in the best shape possible.

"You'd never want it because it is a massive distraction and it does compromise your car," he admitted, "but it's surprising what you can do when you're faced with uncertainty."

Looking ahead, and with an eye on his team two talented youngsters, he concluded that a good, strong showing is very much possible this year.

"We can build because we learnt a massive amount and made a huge step from the STR9 car. Most of it we understand why, there are areas that perhaps surprised us a bit too and we made a bigger step than expected."