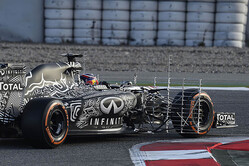 Pirelli has announced that three teams will take part in a two-day wet test at Paul Ricard later this month.

Whilst in previous years whole tests have been compromised by the weather, in recent years Pirelli has gone into the season with little testing of its wet rubber, never more so than 2014 when the two final tests were held in Bahrain.

Consequently, the Italian manufacturer has organised a two-day wet test at Paul Ricard for January 25 and 26.

According to Pirelli, the two-day test will focus just on wet tyres (no intermediates). Different wet prototypes will be tested.

Three teams will take part in the test: Ferrari, Red Bull and McLaren, though, as per the regulations, all will be using their 2015 cars with no modifications allowed.

Details of the drivers participating as well the programme will be made available in the coming days.