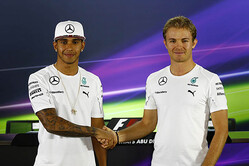 Lewis Hamilton: The Yas Marina really is a stunning place to hold the season-ending Grand Prix. The organisers clearly spent a lot of time and effort on designing the most spectacular venue imaginable and the track is one I really enjoy driving. It's actually a really challenging circuit. There are a couple of high speed corners but it's mostly medium to low speed, so despite the long straights you need to set the car up with a downforce level tuned for low speed grip. It's also a twilight race, starting late afternoon and running into the night, which is quite unusual and I imagine must be pretty cool to watch on TV. Last year, this place brought probably the most intense weekend of my life. I didn't sleep much through nerves and not knowing what was ahead. But this time around there's no pressure, so I'll be well-rested and aiming to go out on a high. A lot of British fans come out to Abu Dhabi so it's like another home crowd for me. To win for them and show how grateful I am for the fantastic support I've had all year would be the best way to end an incredible season.

Nico Rosberg: I've had two really great weekends now in Mexico and Brazil, so I'm heading into the final race on a massive high. Abu Dhabi hasn't always been an easy one for me. Of course, last year was probably my biggest disappointment - losing the title at the last moment with a mechanical problem. But I showed my speed there with pole position and I have good momentum behind me right now, so I'm aiming to end the season on a big positive this time around. Of course, it's also the last race for this incredible Silver Arrow - and it deserves a spectacular send off. Everyone at the factories has done such a fantastic job one again this year. A car like this is something every driver dreams of having in their hands, so I'll be pushing hard to make the most of it for one last time as a tribute to all their hard work. Of course, it will be close as always with Lewis and we saw a big push from Ferrari in São Paulo, so it won't be straightforward. But I'm up for a battle and hopefully we can put on a great show for the fans to end the year.

Toto Wolff, Head of Mercedes-Benz Motorsport: It was very satisfying to leave Brazil with another top result after a race that was far less straightforward than it might have looked. We now go to Abu Dhabi with the best possible Championship positions secured and a chance to reflect on an incredible year. We can all be extremely proud of what we have achieved in 2015. To raise the bar from 2014 was always going to be a huge challenge - but everybody at Brackley, Brixworth and Stuttgart has taken on that challenge exceptionally well. While we celebrate a job well done this time around, however, the next challenge will be upon us before we know it. 2016 will undoubtedly provide our biggest test yet as a group. We will not be backing off - and an entertaining battle at the front between our boys for one last time in 2015 will be the ideal way to show that.

Paddy Lowe, Executive Director (Technical): After another strong showing in Brazil, a fantastic season for the team comes to a close at one of the most glamorous and spectacular venues on the calendar in Abu Dhabi. The Yas Marina circuit is a challenging track with a lot of corners around the lap and contrasting styles to each sector meaning drivers need to use all of their skill to string together a fast time. Despite the long straights that also feature it's difficult to overtake here, so qualifying will be important. It's a different scenario for us compared to last year as we don't have a showdown for the Drivers' Championship - which made this an incredibly tense weekend for everyone involved. This time around, we approach the weekend with a little less pressure and can look to enjoy the racing a bit more - but hopefully with a good battle between Lewis and Nico to sign off for the year in style. Lewis has always been very strong at this track, while Nico has been on a rich run of form over the past few races. So, the stage is set for an entertaining evening under the lights. It's a fond farewell to the W06 Hybrid too - a truly magnificent car which has been a huge credit to the men and women who designed, built and ran it this year. We hope to give it a send-off which reflects what both the car and the team have achieved over the past 18 races.