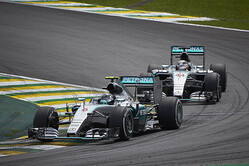 Mercedes team boss Toto Wolff has spoken out in the wake of Lewis Hamilton's criticism of team strategy.

For the second successive race, fans around the world were privy to Lewis Hamilton questioning team strategy.

In Mexico the Briton made clear his unhappiness at the team's decision to pit him for fresh rubber following the deployment of the Safety Car.

At the weekend, in Brazil, he again made clear his frustration at not being allowed to run an alternate strategy that might allow him to pass his teammate, Nico Rosberg, insisting that though faster he was unable to pass the German.

The Briton's request that he be allowed to choose his strategy has been echoed by many fans, particularly in light of the fact that Brazil was one of the most processional races of the season, but not by team boss Wolff.

"Of course the driver in the car is emotional," the Austrian told the official F1 website, "but in the car you don't have the complete picture.

"We have our principles when it comes to strategy, in place since 2013, and they have worked well," he continued. We will not change that.

"In that particular moment, Lewis's tyres were going off and the talk was about the three-stop strategy," he revealed. "This would have been around ten seconds slower, so he might even have lost out to Sebastian. It was therefore out of the question. Of course the driver in the car is emotional, that is understandable. We have hired guard dogs, not puppies!

"We have our strategists," he insisted, "and if the drivers start to make their own decisions they would lose every single race. Strategy is not an instinct-driven decision. Yes, the instinct might be right sometimes, but without having the full set of data you are going to get the majority of your races wrong. That's why we keep it as it is."

In response to claims that fans will feel short-changed by the fact the two drivers didn't go head to head, Wolff said: "I can understand. But we have already changed the situation in this respect massively. Think back years ago when top teams had a clear number one driver, and the number two driver was not getting anywhere near the number one. We've changed that. And believe me it is sometimes pretty difficult to manage letting the two fight with each other. Now you could take it even a step further and let the strategists fight each other! But this is not where we want to get."

Rosberg scored his second successive win on Sunday, and after two convincing performances many are wondering why the German didn't deliver earlier in the season when the title was still up for grabs. Indeed, looking back to the clearly broken figure that took to the podium in Austin, Rosberg appears a different man. On the other hand, with the title secured, has Hamilton eased off?

"Racing drivers are a special kind of species!" admits Wolff. "You could say that Lewis has reached his target and his adrenalin is not as high as it was, and Nico is driving without pressure, and this is the result. But I am not sure that even they know themselves why it is now how it is.

"Probably we will all spend time over the winter reflecting on what has happened towards the end of the season. But one thing is very clear: you can see Nico's class now. And we always knew that Nico's class is important to make Lewis perform like he did - and to make the car faster and the team progress. Mexico and Brazil were showcases for Nico's class.

"I think Nico is still developing as a racing driver," he adds, "and you could see that all those Turn 1 incidents had a pretty similar pattern of how you position yourself. When you are the outside car you have to give up if the guy in the other car is as determined as Lewis is. That isn't just a dynamic between these two - it is a basic part of racing. Only in very seldom cases does it work, like with Verstappen, who managed to hold on."