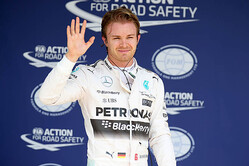 Nico took his fifth consecutive pole position and second in a row at Interlagos. A career first for Nico sees him become the 13th driver to claim five consecutive Formula One poles. Lewis will start P2 after missing out to his team-mate by just 0.078s. The pair sealed the 14th Silver Arrows front row lockout of 2015, claiming the 100th and 101st front row grid slots for the marque in the process.

Nico Rosberg: I didn't have a good start in to Qualifying. Q1 and Q2 didn't go to plan. But then I found a better rhythm in the final session, so I was happy to bring it all together in Q3. It feels great to be on pole again here. It's the best possible position to start the race, I have the quickest car and on Friday we were able to practise a lot for the race, so I'm quite confident for tomorrow. It will be a good battle with Lewis and also the Ferraris, so I can't wait for that. But what happened yesterday in Paris makes everything else relative. What we do here is really not important compared to that and I'm thinking of them today.

Lewis Hamilton: I might still be working on my 50th pole position - but it's been looking closer this weekend for sure. Considering how this week has gone, I'm pretty happy with that. Q1 and Q2 were really good and I was trying to better them in Q3 - but it was such a fine line that it was really difficult to pull something out. I did go quicker on the last lap but I was already down a tenth and a half out of turn three, so that was the difference. It's frustrating when you know you could have done better - but ultimately it's just that one shot you have to make it count. What it does mean, with the gap so small, is that we will have an exciting race tomorrow. To win in front of the Brazilian fans would be something unique and special for me. While we've been focused on qualifying today, I've also been praying for all those affected in Paris. My thoughts are with them.

Toto Wolff, Head of Mercedes-Benz Motorsport: That was an immense lap from Lewis - and an unbelievably immense one from Nico. He was on fire today and he's really fired up to get second in the Championship. He ran a very intelligent session, with some pace management in the early stages to keep his tyres fresh for tomorrow. But it was such a tight battle with Lewis, who was incredibly consistent all through qualifying and just missed out at the end - probably by about a car length. It's a good satisfaction to take the front row again. However, we are little more than a sideshow today; our thoughts, sympathies and condolences are with all the people touched by the tragic events in Paris yesterday evening.

Paddy Lowe, Executive Director (Technical): Congratulations to Nico on a great pole position after a fantastic battle between him and Lewis, with less than a tenth of a second between them at the end. This is our fourteenth front row lockout of the season, a milestone of which the team should be extremely proud. Our approach to qualifying was based on saving the prime tyres for the race, so we ran the option all the way through, making a single run in the first two parts of qualifying, then two runs in Q3. The session ran very smoothly, with the short lap here making it comfortable to complete two runs in the final segment of the qualifying. We're hoping for a dry race tomorrow and looking forward to a great contest in this theatre of our sport. We hope to put on a good show for the passionate, enthusiastic Brazilian crowd.