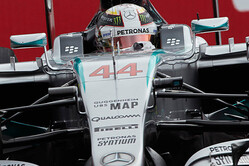 Lewis Hamilton has admitted that heavy partying in recent weeks has taken its toll.

Unsurprisingly, the Briton, ever the centre of media attention, was in even more demand when he finally arrived in Brazil today.

Yesterday began with claims in the Brazilian media that the Briton was unwell and would miss this weekend's race. Mercedes PR machine subsequently spun into action and admitted that whilst the world champion was unwell, and had been advised to take a later flight to Brazil, there was no question of him missing the race.

However, the Briton eventually broke cover, revealing on Instagram that he had been involved in a road accident in Monaco in the early hours of Tuesday morning.

Whilst Mercedes asked reporters at Interlagos today not to raise the subject of the accident, it was Hamilton himself who raised the topic, admitting that his lifestyle in recent weeks has taken its toll.

"It was a result of heavy partying and not much rest for a week and a half," said Hamilton. "I am a bit run down. I have been non-stop and trying to fit training in at the same time and not getting a lot of sleep.

"I'm on the up-slope, so I am a lot closer to 100 percent," he added. "I had gone to Mexico on the Wednesday. We worked all day Wednesday, Thursday, Friday, Saturday, Sunday, Monday, Tuesday, Wednesday, and Thursday. And then I had my mum's (birthday) party and that killed me, That was pretty amazing, but I really felt it on Sunday and Monday.

"I am excited to be here because this is a race that Ayrton struggled at for some time until he finally got his win and this is a race I have not won out of all the tries that I had," Hamilton concluded. "I am glad that we have still got races to go. At the end of the season, you have a long wait until you get back in the car so I am cherishing the moments that I get in the car. I am not as excited for the break."

Meanwhile it has been confirmed that the Briton's early morning shunt involved his Pagani Zonda.

"Mr Hamilton's foot slipped on the brake and clutch pedals and his vehicle struck three parked cars," revealed a spokesman for Monaco's Palais de Justice. "He was tested for alcohol but the result was negative."

In 2007, Hamilton had his car impounded after being caught speeding near Paris, whilst in 2010 he was charged with reckless driving after beeing caught 'Hooning' (spinning the wheels of his car) outside Melbourne's Albert Park circuit.