Hamilton unwell but will race in Brazil 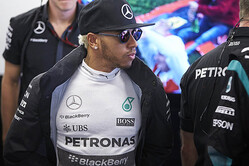 The Brazilian media has reported that after withdrawing from a promotional event in Sao Paulo due to illness, the Briton, who secured the 2015 title in Austin, is unlikely to take part in this weekend's Grand Prix, the penultimate round of the season.

However, Mercedes was quick to dismiss the claims.

"No, he's not going to miss the race," insisted a team spokesman. "He is going to be a day late," he added, "He was feeling unwell and the doctor advised him to cancel the earlier flight so he missed a press conference today. He will be with us tomorrow."

Never having won in Brazil, Hamilton has admitted that winning the race synonymous with his hero, Ayrton Senna, would be special.

"This was the home race for Ayrton, so it was a dream of mine to race in Sao Paulo when I was younger and I always feel his presence when I'm there," he said.

"It's amazing to think that it took Ayrton eight attempts to win this race and it's one of the few I haven't yet won myself. If I can change that this weekend it would be a salute to him and another highlight to add to this amazing year, so I'll be going all out to make that happen."