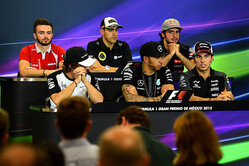 Lewis, if we can start with you: you've had a few days for it to sink in and now you arrive here as a three-time world champion. How does it feel and how were the celebration?
Lewis Hamilton: Well, hola everyone. Is it como estas.

LH: Como estas? Really happy to be here in Mexico, it's my first time and the last few days have been relaxed, not too hectic, a little bit of partying but obviously conscious that we have the race this weekend, so couldn't do too much damage. So I plan for more the end of the year to really go in. I don't think it's really sunk in yet. I think every day I'm kind of pinching myself, thinking 'I can't believe it's really happened'. And I guess probably, like, yesterday I was straight back into business, I hit race mode, so I've not really been thinking about it that much but still it's a good feeling.

You haven't won it before with three races to go, you've only ever won it at the last, so what's the plan for the rest of the season, still maximum attack?
LH: For me it's always maximum attack, so we've still got these three races. For example, we've got the Mexican Grand Prix here, the first time in 23 years. I think it's exciting for the Mexican people; it's exciting for me, and as all us driver [feel], you love to have your stamp on the first race back here, so that's the target and yeah, we've still got big races to win.

Thank you for that. Sergio, big week for you, busy week for you. Are you enjoying all the attention? Is it what you dreamed of?
SP: Yeah, it's definitely a big dream for me to be able to race in my home country. It's been more than 12 years since I raced in my country, so definitely it's going to be the biggest day of my career on Sunday, because to race in front of my whole people, all my country, it's something very special. You know how Mexicans are. So, it's going to be the most special day of my career, no matter what result I get on Sunday. I really hope that we can have a great result and cheer all the fans that are doing the effort to come. But definitely it's just going to be a dream come true on Sunday to race in front of my crowd.

You're on a bit of a roll right now in terms of performance, so you've got a lot of confidence coming into this race. It's the perfect time to have it for you, isn't it?
SP: Yeah, definitely, we've been having a very good couple of races; the last six have been really strong for us. I think there is a very good chance we can keep up the momentum. I'm looking forward to do that and try to score as many points as possible on the weekend for the team and for all the people who are coming to see me on Sunday.

Thank you. Fernando, you drove a great race for little reward unfortunately in Austin, but you're clearly not lacking motivation. Where do you think that inner steel, that inner strength from?
Fernando Alonso: Well, I think the team is doing a good job and everyone is pushing to improve the situation. All the new parts that we bring to the races they seem to deliver what we expect from them. Definitely there is a very nice direction in the team this year. It has been tough; it has been frustrating at times. But we kept all united, we kept all moving in one direction, one team and for next year I think we are putting some of the problems we had this year in [their] place for next year. So you keep enjoying racing and when the circuit suits a little bit our car there is a little bit of extra motivation and we push a little bit harder. It was the case in Austin, where we felt more competitive in all sessions over the weekend. In the race as well, it has been probably the best race of the year for me, Austin. In the first 20 laps I think in nine of them was quicker than Lewis and this didn't happen for the past two years and a half! So this was very good news and definitely I enjoyed the race and, as you said, zero points for an issue in the last 10 laps but it was definitely a different feeling compared to the rest of the year.

You've said you think McLaren can find two and a half seconds over the winter. What makes you so confident, what have you seen?
FA: Well, I think the lack of performance we have in some areas of the car are quite fundamental issues that should have a not too difficult answer, let's a say, or not too difficult a solution. It's just we need to copy the direction everyone has apart from us. It's some of the time that we feel we will recover with not much penalty, because for the others they already have it in their package. So some of the performance gain we expect will come for free but it's true that all the competitors will work very hard over the winter and they will recover a couple of seconds also, so we need to make an extra, but we are feeling optimistic, we feel confident of next year being very competitive. We are realistic at the same time. We understand that in Formula One there are no magic things for being one year out of Q1 and the next year fighting for the championship - that's a very, very optimistic target but we will try our best.

Thank you. Pastor, what can you tell us about your race in Austin? You managed to avoid all chaos and end up in the points.
Pastor Maldonado: Yeah, to be honest it was quite difficult from the set-up and balance point of view with the car during the entire race. We were not as quick as expected, as always, during the race. But yeah, when I saw the people fighting in the front, I was very cautious and trying to get the places from other car mistakes and yeah it was quite clean from my side and very consistent. At the end, P8. For sure we were expecting something but a few more points. It's important for us at this stage of the season, so looking forward to continuing like this and going in the points.

Your new team-mate was announced in Austin. You'll essentially be team leader next year. How do you feel about that? Does it change your outlook; do you feel added responsibility?
PM: Yeah, I hope it will be a completely different year to this one, with more resources. We need to push harder than this year, especially on the car and you know, yeah, try to be more solid on the development.

Carlos, coming to you. At this point in the season there is a lot of personal pride at stake. The battle between you and Max is really tight on track, even if the points don't show it. Are you enjoying that battle and how do you come out on top with three races left?
Carlos Sainz: Yeah, I think it's been a great year for both of us. Apart from the results, apart from the show, I think we are both learning a lot. From my side, I am enjoying a lot every single race, especially these last two. Obviously I started from the back and had to make my way through and I enjoyed that a lot. Everything is very good. We just need to make sure we keep learning, I keep learning until the end of the season. We have three races. I think it's important to finish on a high, so keep the momentum up from the last two races and yeah, finish the season on a high.