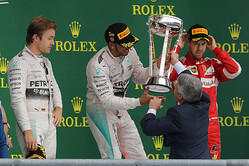 Mercedes boss Toto Wolff has played down talk of a rift between his drivers following Sunday's United States Grand Prix.

Taking an early lead, following a questionable incident at the first corner, Lewis Hamilton went on to take the win and his third title.

Before the podium ceremony however, fans around the world witnessed what appeared to be an acrimonious incident in the ante-room when the Briton tossed an official podium cap bearing the word '2nd' on it to teammate Nico Rosberg who promptly flung it back.

Keen not to see the situation escalate, especially as the early deciding of the title leaves the F1 media in need of some scandal to fill its pages, Wolff has attempted to play down the situation ahead of this weekend's return to Mexico.

"A lot was said after the race about the relationship between our drivers and most of it was hot air," said the Austrian.

"One of our boys won a world title on Sunday, and one lost it," he continued. "If a few emotions boil over in that scenario, it's completely understandable and human. Like always, we will do the analysis of what happened on track as a team - but we will do it behind closed doors.