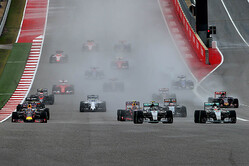 "It was brilliant, wasn't it?" he told Motorsport.com. "It often happens when it rains.

"I was pleased for Lewis, and also for the fans," he added. "I came from England, I was worried about coming all this way and it not happening! So it was great that it came off, and it was a brilliant race.

"It also shows you that with the right ingredients, F1 is still fantastic. You saw that the Red Bulls with less power and more grip were right up the front, until the slicks came on."

His company having reaped billions from the sport without actually investing a single cent in it, it is hardly surprising that McKenzie is so enthusiastic about the race. On the other hand, had the event been cancelled due to the weather it is unlikely the Briton would be quite so vocal.

Buoyed by a thoroughly entertaining race, McKenzie was also keen to scotch rumours that CVC is pondering selling its stake in the sport any time soon.