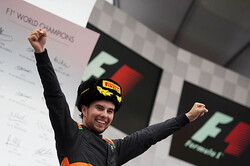 Force India has asked for an advance on its 2016 prize money in order to pay its suppliers.

The Silverstone-based outfit has made no secret of its financial problems, indeed, unhappy with the way the prize money pot is distributed - among other things - along with Sauber it has called on the European Union to investigate the sport.

Such is the team's long standing unease with the distribution of the prize pot, there was talk around this time last year that along with Sauber and Lotus it might boycott a number of races.

Explaining the move, deputy team principal, Bob Fernley, said the money was needed in order to pay suppliers at what is always a difficult time of year.

The prize pot, which is based on where teams finish in the Constructors' Championship, and in some cases includes historic performance bonuses, is paid on a monthly basis from February to November.

Fernley revealed to Reuters that his team made a similar request before this season got underway.

"The only difference between what we did at the beginning of this year and what we are planning for 2016 is just bringing it forward a month or so earlier to cash-flow it better," he said.

"We don't want suppliers suffering," he added. "We know we've got to draw down because we need it through the winter period because we don't get any payments, we're being a bit more proactive this year in making sure we're ahead of the game rather than behind it.

"What we've asked Bernie to do is put it through process and he's obliged with that," revealed Fernley. "We've asked for it to start at the end of November because that's when our payments stop."

The team is currently looking good to finish fifth in the standings, its best finish since entering the sport in 2008.