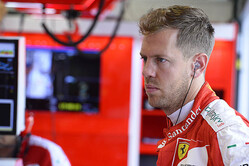 Sebastian Vettel admits he isn't expecting this weekend to be anything like Singapore.

Though it was business as usual for Lewis Hamilton and Mercedes in Japan, a week earlier, in Singapore, it really did appear the tables were turning.

As sections of the media went in to overdrive, predicting that Mercedes era was drawing to a close, at Suzuka the German team was as formidable as ever.

With Sochi another street track, some are predicting that this weekend could see the balance swing in Ferrari's favour again, Vettel isn't so sure.

"It will be quite different," he told reporters, "it's a completely different track, and other than the compounds I don't think there are many similarities to Singapore. But if the result were the same I wouldn't mind!

"It's a long way, today is Thursday, first of all we focus on Friday, and tomorrow we'll try to get the car in the operating window and then go from there.

"The weather this weekend could play a big role," he hinted, though the latest reports don't forecast rain, "maybe tomorrow we won't use the soft and supersoft tires at all… we will see.

"Last year it was a difficult track to get everything together, the gaps between the cars was fairly big, because the people was struggling more than usual.

"You need to get everything right, this is what we try to focus on. Last year it was not much of an exciting race for me, whereas in general I think this year we have a competitive car, a competitive package. It would be nice to be on the podium at the end of the race."

"Our target is to fight for the championship," he concluded, "this is not a secret and that's where we want to go."