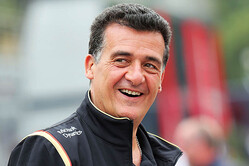 A double points score for the team in Japan has Lotus F1 Team Deputy Team Principal Federico Gastaldi eager to reiterate the name of the game; scoring at every possible opportunity.

How positive was it for the team to get a strong event on track in Suzuka?
Federico Gastaldi: Points mean prizes so we're always out there to score as much and as often as possible. In Suzuka we saw two strong drives from Romain and Pastor which really underline the hunger from everyone at Enstone. No matter what the circumstances, we'll keep fighting for our dinner.

What does the Sochi event bring to Formula 1?
FG: It was a brand new event in 2014 and certainly exciting for everyone attending. F1 is a global spectacle and it shows the strength of the sport that we race in Russia. We have a very good Russian Formula 1 driver in the sport with Daniil Kvyat and at Enstone we had the first ever Russian F1 driver - our friend Vitaly Petrov - so we understand the market and enjoy the support we get from Russia.

Do you see Russia as an important market for F1 in the future?
FG: Absolutely. We should be racing in the world's biggest country. We have seen over the last 20 years or so, since the change from the Soviet Union, that the opportunities there are huge. The rapid expansion of the economy and the many big sporting events that are being held here over the next decade will make for great momentum in commercial opportunities. At Lotus F1 Team we are always investigating new markets and looking to expand the F1 experience for new audiences.

What can you say about the current situation with Renault?
FG: It looks like we're engaged to be married again, which is interesting as we've had a few relationships together before! It's positive for the sport and it's positive for Enstone that a company with the history and prestige of Renault is looking to strengthen its role in Formula 1. It's true we've both experienced a few knocks over the years but we've also had some exceptional highs and that makes us all collectively exceptionally motivated to harness our resilience and show everyone what we can do.

The driver market is firming up for 2016, what's the situation with the team?
FG: We know that we can now publically say bonne chance to Romain who is headed to pastures new next year. He's been a real asset to us over the years so we'll certainly miss him. We know we have Pastor confirmed for one seat and we know that there are quite a few tasty drivers available out there and we're doing everything to ensure that we've got a desirable race seat, which needs to be filled. What happens next is that there'll be a number of discussions in a number of places then at some point we'll have an announcement to make. I can at this stage publically confirm that it won't be me driving.

How do you expect the rest of the season to play out for the team?
FG: Hopefully with more action on track than off. It hasn't been the easiest of years but we keep showing that we're capable of performing well when it matters. It would be nice for Romain to have a good positive end to his Enstone career and it would be great for Pastor to have a strong run of results to bring his season to a close. We're all working to those aims.

One year on from its debut on the F1 calendar, what do we know about Sochi?
Nick Chester: We know that the surface is very smooth and last year we struggled generating temperature with the tyres, partly through the smooth surface and partly through what was a conservative tyre allocation. Pirelli's softer allocation for this year along with the more weathered track surface and our better knowledge of the circuit should mean we fare far better in this regard. In terms of its needs, we know that it's a track that is quite power and traction-sensitive. The layout presents a lot of slow speed corners and long straights. Braking down into Turn thirteen is very severe and you come out of the kink before you brake so it is a difficult corner to get right. Overall, the whole track is quite technical, so it certainly a challenging one for the drivers.

Are there any climate challenges?
NC: The weather can be quite unusual in Sochi as you have the mountains on one side and the sea on the other. There's potential for a reasonable mix of weather in the week ahead so we'll be kept on our toes.

How rewarding for the team was it to get points from both cars in Suzuka?
NC: It was very rewarding and also very important for us in our fight for fifth place in the Constructors' Championship. We closed up a little bit more on Force India and of course there is a bit more to do…They had a good race in Monza when both our cars got knocked out but effectively we're one good race away where they have a bad one and we can catch up. It will be tight all the way until the end of the season.

Was more possible at the last race?
NC: We thought that we'd be fairly good in Suzuka. It's the sort of medium downforce track which tends to suit us. It's quite a power sensitive circuit which equally suits us. We knew that we'd be quite competitive. I think that we did a good job to get seventh and eighth place. Maybe with a different tyre strategy we could have raced Nico Hulkenberg and Force India better and had a chance to beat him but in the end we had a pretty safe finish.

Renault has signed a letter of intent to buy the team; what does this mean for Enstone?
NC: It looks like there are exciting times ahead. We've worked exceptionally closely with Renault for many years in our history so it's going to be exciting to embark on a new phase of our relationship. There's a lot of work to do for next year so it's certainly never a dull moment at Enstone.

How has it been working with Romain over his years with the team?
NC: It's been great working with Romain. He's had so many great races with us with fantastic results towards the end of 2013 when he had a string of podiums and drove some stunning races just like he did in Spa this year. He had a difficult year in 2012 but he came back from that stronger and drove brilliantly the following year. Romain has proved to be really quick, always qualifies well and makes good choices during the races. He is a good driver who is fun to work with; for sure we will miss him.