Lotus duo looks ahead to Sochi 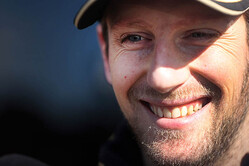 With just five races left before he heads for the life of a CNC machine operator, Romain Grosjean talks about today, tomorrow and yesterday at Lotus as well as planning a Russian revolution in Sochi.

You've been announced as headed for pastures new for next year: was it something we said?
Romain Grosjean: Au contraire. I'm headed to a new team and a new and very different challenge in 2016 - it's true - but it's going to be very emotional for me to leave the team that I've been part of for so long. I've worked with Enstone for 10 years, we had ten podiums together and I took part in nearly 80 races... I have to say that the people at Enstone are the strongest group of people ever to keep pushing no matter what the circumstances. I had to think long and hard for the next step of my career.

Is it going to be an emotional 'au revoir'?
RG: Part of my heart will absolutely always be with Enstone where I've grown and experienced so much over the years. I can remember turning up in September 2005 at the front gate, not speaking English and being very shy. Some of the people I met that day are still there. I'm turning a new leaf in my book but it doesn't mean that it's the end of the book so why not come back to Enstone one day to become World Champion with the team! Leaving Enstone at the end of the season won't be easy... I promised everyone some beers in December when I come to say goodbye to the factory. Until then we've got five races left yet this season and I'm absolutely determined to end my time with the greatest high possible.

What's the battle-plan for Sochi?
RG: It would be fantastic to shake up the order again and get a really strong result, and that's honestly what we're always trying to do. It's a pretty decent circuit and it will be interesting to see how it's matured. Certainly the track surface will have changed and it will have settled somewhat. We struggled massively for grip last year, but we've got a softer tyre allocation from Pirelli, the performance of which we should be better equipped to maximise. It will be a good exercise for us to see if we can give a better performance than our first Russian Grand Prix.

What did you think of your first experience in Sochi last year?
RG: For me it was special to race at the site of an Olympic Games. I'm a huge fan of the Olympics and especially the Winter Olympics, because my grandfather competed in skiing events at the 1948 and 1952 events. The facility itself was fantastic and the track really well engineered. The entire site had its own unique flavour. It's always great to see how an event matures and I know we have many Russian fans. It would be superb to see as many as possible there supporting us.

What's the track like to drive?
RG: It's a pretty cool track actually with a useful number of straights and some big braking. You've got turn three which is just about flat out which is good fun. The corners flow well together with the final section a bit more tight and twisty. Last year was hard to get the tyres working, this year the Pirelli allocation is softer. Looking outside of the driver requirements, the facilities are really nice and the paddock is a friendly size so it's a good one to work in.

What are the benefits of your second time at a track?
RG: We won't get lost going to the track in the morning! This is a good first step. We know what to expect, what the track is going to be like, we know the setup and what's needed for a good race. I think it could well be a strong race for the E23.

After a solid outing in Suzuka, Pastor Maldonado looks to maintain momentum for the final five races of 2015, starting with the Russian Grand Prix in Sochi.

Suzuka was a solid race for you, how does that help you heading to Sochi?
Pastor Maldonado: You always approach a race on its own merits so my outlook heading to Russia is not affected by what happened in Japan. It was positive for us to have a solid race and get some good points, of course, but that is what we try to achieve at every race, regardless of what happened at the one before. Equally, if we have a race like Suzuka for all of the remaining events it would be a strong end to the year.

What were your first impressions of Sochi last year?
PM: It was a great and amazing event, really well organised and with a good attendance. It was a special experience to arrive at a new country for Formula 1 - and a new country for me – then see strong immediate support like we did. I'm looking forward to returning and seeing how they built upon their strong first event.

What was it like when you drove the track for the first time?
PM: It's always a strange experience. You don't know exactly how it will be, even though you've walked the track it's very different when you're sat in the car and actually driving. You have to push to the limit to realise the fastest way around. It's a very technical circuit. Last year we saw the grip level improve a lot over the course of the weekend as it was new which meant we really needed to work hard on the setup to maintain the balance and get the car working as well as it could.

What do you think of the Sochi layout?
PM: There are very many corners, with a couple of sections of stop and go. It's quite a long lap and a reasonably technical one too. If you make a small mistake in one corner, you are punished for the rest of the lap. If you're off line for one corner, it might not be until one of the straights that you can recover. Off-line is very slippery too so you're doubly punished! Every single part of this track is important! In terms of enjoyment, I like the first sector the most, but it's a good track overall.

How much easier is it heading there for a second time?
PM: It will be much easier this year. Last year was all about discovery and learning; this year we should be several steps forward so be able to unlock more pace quicker.

Romain's headed elsewhere for 2016, any thoughts on who you would like as a team-mate?
PM: Honestly I have no preference. Throughout your career you work with a variety of team-mates so you get used to working with different people. Ultimately, everyone is trying to make the car faster and perform as well as it can for an event, so you're all working to the same objectives.

We've seen the outline race calendar for 2016, what are your thoughts?
PM: Firstly, as a driver you want to race as much as possible so I'm looking forward to 21 races. It looks like a good line-up of events and it will be interesting to visit races such as Malaysia and Russia at different times of the year as well as Baku for the first time.

Renault have signed a letter of intent to buy Lotus F1 Team, what does this mean for you?
PM: This is positive news and I'm looking forward to things progressing here. I've worked with Renault in the past and know that they are real racers. I know Enstone always works very hard and we've seen what the Enstone and Renault combination has achieved in the past. Let's hope there are great things ahead.