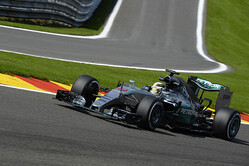 With only three pole-sitters going on to win the race in the last ten years, the usually coveted position is clearly not quite as critical here.

Following this morning's dramas, this morning's final practice session was somewhat muted, the only incident being a couple of wobbles and drivers getting a little frustrated with one another.

Having been out-paced by his teammate in both of yesterday's sessions, this morning it was Lewis Hamilton's turn to lead the way, the Briton edging out his main title rival by 0.498.

Having finished behind the Red Bulls yesterday, Ferrari flexed its muscles this morning, Sebastian Vettel and Kimi Raikkonen looking strong, though not as strong as the Mercedes duo, particularly in S2.

Sergio Perez was fifth quickest, ahead of the Red Bull duo, with teammate Nico Hulkenberg eighth, the force India strong in the first two sector but losing out in the third.

Despite Rob Smedley's assurances that his team is confident, Williams has failed to impress thus far, both drivers over a second off the pace.

Though the Toro Rosso duo are outside the top ten, both drivers got through a busy programme and the Faenza outfit is looking stronger than its position on the timesheets suggests.

And then there's McLaren. As expected both drivers are to have new engines this afternoon, which means that having incurred a 55-place penalty between them yesterday, will incur a further 50 places today. And they wonder who some people are losing interest in the sport.

Alonso and Button are not alone in being hit with penalties, with Grosjean set to lose out (5 places) following a gearbox change and Verstappen (10 places) after his team changed his engine.

The lights go green and Bottas leads the way, followed by Maldonado and Merhi, the Manor driver is already on the option rubber, as is Nasr.

Merhi posts 54.079 to get proceedings underway, but this is soon beaten by Bottas who stops the clock at 50.195. Moments later however, Hamilton goes top with a 49.577.

No messing as Rosberg eclipses his teammate by 0.079s, whilst Perez and Hulkenberg take fourth and fifth for Force India.

Nasr goes fourth, but like his teammate he is on the softs.

Perez heads out on the options as Massa finally leave his garage, the Brazilian also on the softer rubber.

With just over five minutes remaining, the Ferrari duo also switch to options, as more and more drivers make the switch. Rosberg is out again but on the primes, Mercedes clearly confident at this stage.

Kvyat goes fifth (49.469) as Hamilton goes quickest in S2 on the harder tyre.

Despite being on the harder rubber, Hamilton goes quickest again, crossing the line at 48.908. Moments later teammate Rosberg posts 48.923. The Mercedes is simply awesome here.

"I've lost power," complains Verstappen, "there is something wrong." The Toro Rosso driver is currently seventeenth.

A late improvement for Ericsson ends Button's dream of making the cut, as Verstappen improves to thirteenth... despite having no power.

A late improvement also for Bottas, who posts 49.026 to go fourth and thereby demote Nasr.