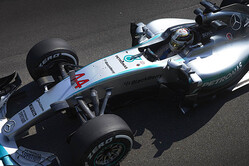 Nico Rosberg topped the timesheets in both sessions yesterday, and while the German will be buoyed by his clear pace here, it is his spectacular tyre failure in Blanchimont in FP2 that dominates proceedings.

With Pirelli yet to issue any official comment there is talk that the Italian manufacturer is adamant that Rosberg's blow-out wasn't the result of a tyre failure. Interestingly, overnight, following comments made by a number of drivers at the official briefing, the newly introduced 'sausage' kerbs at T1 and T4 have been removed.

The kerbs, which were introduced in an effort to prevent drivers exceeding the track limits were the scene of numerous incidents, several drivers having their cars launched into the air.

With Williams sticking to its traditional Friday programme, it's difficult to see where the British team fits into the running order at present, though Rob Smedley appeared very confident.

Consequently, based on Friday's proceedings it's currently Mercedes (as ever), ahead Red Bull and Ferrari with Force India and Sauber also looking good.

Pastor Maldonado had another misunderstanding with the barriers - all the fault of the media you know - whilst a late crash for Ericsson at Pouhon resulted in the third red flag of the day.

The red flags meant that the teams were unable to complete their full programmes, long runs particularly compromised.

The much anticipated upgrade from Honda is hard to judge, Fernando Alonso and Jenson Button having picked up 55-place grid penalties between them and the threat of many more today when McLaren is expected to change its engines again.

Tyre options this weekend are medium (prime) and soft (option), with around 1.6 - 20s between the two compounds.

"Full investigation into Rosberg's FP2 tyre now concluded," tweets Pirelli moments before the start of the session, "no structural integrity issue on this or any other tyre". "Damage is consistent with an external source," added Paul Hembery.

The lights go green and Vettel leads the way, followed by Stevens, Grosjean, Merhi and Raikkonen.

A spin in the final chicane for Merhi as he attempts to overtake Verstappen and gets it totally wrong. A lap later the Dutchman goes quickest with a 51.963.

He's a feisty chap is Verstappen this morning, the youngster gesticulates at Perez feeling the Mexican was unnecessarily slow in Eau rouge.

All eyes on Hamilton who goes quickest in S2, finally going on to cross the line at 51.432 and take second on the sheets.

Despite having said that yesterday's performance wasn't a true picture of his team's chances here, Ricciardo goes quickest with a 50.680.

As Rosberg improves to third, despite a mistake in the final corner, teammate Hamilton asks about wind direction. Seemingly it was the strong tailwind that 'forced' Rosberg into his error.

A wobble for Raikkonen at T13 as the Ferrari is caught out by the wind.

Hamilton goes quickest with a 50.635, just 0.045s clear of Ricciardo, as the McLaren crew check a very, very rough sounding engine in Alonso's car. The Spaniard has completed just one lap thus far, and has yet to post a time. Massa, Button and Bottas are also yet to make an appearance on the timesheets.

Twenty-five minutes in, Ricciardo and Verstappen are the first to make the switch to the option rubber, the Australian immediately improving to 49.930 whilst the Dutch youngster posts 50.599 to go second.