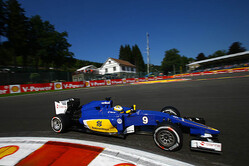 Two instances of kerbing, both new for 2015, were clearly causing problems yesterday, and as a result of comments made by numerous drivers at their official briefing the FIA has acted overnight and had them removed.

"The last 10 metres of the bump behind the kerb on the exit of turn 1 (La Source) has been removed," said the FIA this morning, "drivers may therefore re-join the track more easily without crossing the bump a second time."

At the same time they confirmed that "the orange kerb on the apex of turn 4 (Raidillon) has been removed".

In terms of the ever increasing issue of track limits, whereby drivers use all the track - and then some - hence the need for the controversial new kerbs the FIA said: "Further to the discussion in the meeting, and as a result of the change to the kerb in turn 4, a report will only be made to the stewards if a driver has exceeded the track limits (principally but not limited to the areas behind the kerbs in turns 4 and 15), and is suspected of gaining an advantage from doing so."

Pirelli is still investigating the cause of Nico Rosberg's spectacular failure at Blanchimont but initial research suggests the Italian manufacturer is adamant the tyre was not at fault.

Whether Rosberg's tyre failure and the removal of the kerbs are linked remains to be seen, but the kerbs were the cause of a number of incidents for fellow drivers.