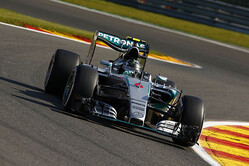 Ahead of today's second practice session the air temperature is 22 degrees C, whilst the track temperature is 36 degrees. It remains bright and sunny.

Nico Rosberg was quickest in FP1, despite suffering a technical issue earlier in the session which looked a lot worse than it clearly was. As a whole army of technicians and mechanics gathered around the rear of the Mercedes, one feared the German was in for an early bath.

Teammate Lewis Hamilton was second, just 0.242s off the pace, with Daniel Ricciardo and Kimi Raikkonen both within 0.4s.

As ever there are lots of updates, most notably the 'scooped' rear wing on the Mercedes, whilst Honda's much vaunted upgrade has yet to inspire.

There was one red flag, the cause of which was Pastor Maldonado, the hapless Venezuelan losing the rear of his Lotus on the exit from Les Combes. This afternoon sees teammate Romain Grosjean in action, the Frenchman having handed his car over to Jolyon Palmer for the opening session.

With Williams yet to show its hand - as is ever the case on Fridays - it's interesting to note that the Red Bull duo is up there with the Mercedes and Ferrari's though the Austrian cars are clearly losing out in S1, the uphill sector which requires serious grunt.

Tyre options are medium and soft, as in Hungary, the softer rubber making its first appearance of the weekend over the next ninety minutes.

The lights go green and Bottas gets proceedings underway. The Finn is subsequently joined by teammate Massa, Vettel and the Manor duo. Indeed, such is his eagerness, Vettel takes to the grass at the chicane as he passes Bottas.

On his first flying lap Raikkonen goes straight to the head of the sheets, the Finn posting 52.292.

A big wobble for Bottas at Pouhon as Rosberg momentarily goes quickest (51.292) before being deposed by Kvyat (51.135).

Hulkenberg has to run wide at the chicane in his efforts to avoid a ludicrously slow Lotus.

A 51.052 sees Rosberg re-take the top spot as Hamilton goes third (51.580) and Verstappen runs wide in T9, a corner that is catching out a lot of drivers today. He subsequently runs wide again, this time at Pouhon.

"I think we should try again, before we try the option tyre" the Dutch youngster is told, "we need a clean lap." Elsewhere a lock-up for Rosberg in the chicane.

Twenty minutes in, with Maldonado yet to make an appearance, Ricciardo is the only other driver yet to post a time. However, the Australian in on track and subsequently posts 51.080 to go second.

Replay shows Kvyat very, very lucky not be hit by Nasr as the Russian leaves his garage totally unaware of the approaching Sauber. Elsewhere, Hamilton reports a problem with downshifts.

The stewards are investigating the earlier incident involving Hulkenberg and Grosjean.

Vettel is among the first to switch to the option rubber and immediately goes quickest, the German stopping the clock at 50.940. Rosberg, now on softs, responds with a 49.385 whilst Ericsson posts 50.709.

"We need more rear grip," says Button as he reveals that his front grip is much better than FP1.

As Rosberg goes quickest in S1, Nasr posts 50.928 to go third overall. However, the Sauber driver is then demoted when Hamilton and Raikkonen go second and third, posting 49.687 and 50.461 respectively.

Verstappen reports "big moments" at T15 and the last chicane.