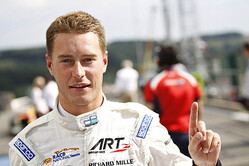 Championship leader, Stoffel Vandoorne flew to pole position in today's qualifying in Belgium. The ART pilot took to the circuit whilst the remaining field watched on from the pits as he set a blistering lap of 1:56.278 on home soil.

Series returnee, Oliver Rowland, made a late jump to join the Belgian on the front row just a tenth away from the top spot.

Sergey Sirotkin and Jordan King line up for tomorrow's Feature Race in third and fourth whilst Nobuharu Matsushita and Mitch Evans lock out the third row of the grid.

Pierre Gasly and Alexander Rossi set times fit for seventh and eighth, respectively, as Alex Lynn and Norman Nato round out the top ten.