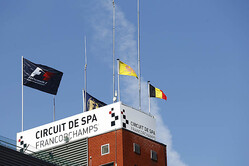 The GP2 action returns this weekend at Spa-Francorchamps after a well-deserved and much needed summer break. All eyes will focus on Series leader and local hero Stoffel Vandoorne who will have at heart to please his home crowd.

The McLaren test driver has been chasing after a fifth win this season since Round 5 at Silverstone. He came close to it at Budapest last month, but he was denied by his teammate and had to settle for second place in the sprint race.

Two rookies stole everybody's thunder in Hungary, starting with Alex Lynn: the Williams test driver grabbed his first GP2 pole position and followed this great result with his maiden feature race win. On the following day, it was Honda protégé Nobuharu Matsushita who took a lights to flag victory ahead of his teammate Vandoorne. The Belgian ace still left the Hungaroring with a comfortable 85 point lead over title rival Rio Haryanto who enjoyed another strong race weekend. It was a round to forget though for Alexander Rossi who for the first time this season failed to score points in Hungary, but he will undoubtedly work hard this week to rebound in style.

The seventh round of the 2015 season takes place at one of the most challenging, demanding and longest circuits on the calendar, Spa-Francorchamps. The wide variety of high-speed corners mixed with long and fast straights makes it a unique layout. The uncertainty of the weather always provides drama too. The drivers will have at their disposal P Zero hard and soft compounds.

There will be three driver changes starting with Oliver Rowland who rejoins MP Motorsport whilst Gustav Malja will debut in the Series at the wheel of the No 12 Trident car in replacement of Rene Binder who is suffering from a streptococcus infection. Sergio Canamasas returns to Daiko Team Lazarus to stand in for a still recovering Zoel Amberg. Finally, Hilmer Motorsport will enter just one driver (Nick Yelloly in car No 24).