Raikkonen gets some track action in Helsinki 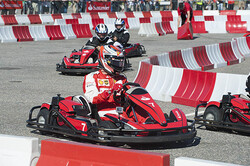 Kimi Raikkonen took to the streets of Helsinki in a kart ahead of the Spa weekend.

The Finn was greeted with a glorious summer's day in Helsinki, just a few kilometres away from his home town of Espoo.

The Ferrari driver was in the Finnish capital to take part in an event organised by team sponsor, Santander, days ahead of the Belgian Grand Prix which marks the resumption of the 2015 season following the summer break.

Over the course of the day Raikkonen, who was unlucky not to finish second in Hungary, met fans and local media, before taking part in a karting competition. He also had a go on a driving simulator that was on site.

"It's nice to be at an event so close to home," he said. "I like this sort of thing, it's always fun driving a kart."

The Finn, who is currently without a contract for 2016, is thought to be key to this year's driver market, the 2007 world champion having previously said that Ferrari will be his last team in F1.