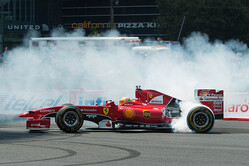 The noise of a V8 engine provided a wakeup call to any who were not already lining the Paseo de la Reforma for the Ferrari Street Demo.

The event was organised by the team's sponsor Telcel, to celebrate Formula 1's return to Mexico. Doing the honours on his home turf, at the wheel of an F60 - the car with which the Maranello outfit contested the 2009 World Championship - was third driver, Esteban Gutiérrez.

He carried out a series of demonstration runs on the road that links the Glorieta de la Palma to Fuente de la Diana Cazadora. Also taking part was another Mexican, Ricardo Perez de Lara, at the wheel of the 458 Challenge EVO with which he competes in the North American series of the Ferrari Challenge.

"It was an incredible feeling and a cause of much pride for me to drive a Ferrari here today," said Gutierrez at the end of the event.

"Following on from the Rodriguez brothers and the fact there has not been a Formula 1 race in Mexico for so many years, meant that driving a Ferrari on the streets in this country has a special significance for me. The enthusiasm of the crowd confirms the great passion there is for this sport in my country."