As the summer break drags on, fans are still talking about the Hungaroring thriller, a race that had them on the edges of their seats from lights to flag.

Sadly, a technical failure prevented Kimi Raikkonen from making it a 1-2 for the Maranello outfit, but as we head into the second half of the season it seems Mercedes might not have it all its own way. 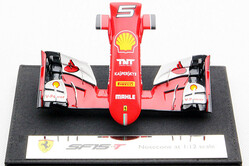 The SF15-T was codenamed Project 666 before the unveiling of the new name, which stands for Scuderia Ferrari 2015 Turbo on 26 January, the car itself officially launched just days later on 30 January.

Having already met the team's target of two victories, the F1 world holds its breath as it ponders whether Hungary, and the SF15-T, marks the beginning of the Scuderia's revival.

This beautifully detailed model of the Ferrari SF15-T Nosecone at 1:12 scale is available in both driver versions - RRP: £99.00 - and can be purchased directly from Amalgam, which will be launching a 1:8 scale model of the car, and a full size steering wheel replica within the next two weeks.