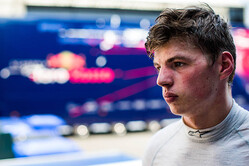 It's fair to say that just halfway in to his debut season, it is clear Max Verstappen is one of the great finds, not only of 2015 but recent history.

Finishing a strong fourth in Hungary, it is easy to forget that this is not only his first season in F1 but only his second season in single-seater racing, such has been his meteoric rise.

At every step of the way he has been guided by his father, the legendary Jos Verstappen, the Dutch racer having enjoyed an F1 career that spanned eight season and over one hundred starts with teams including Benetton, Tyrrell, Arrows and Minardi.

If there's one thing however that Max envies in terms of his father's career, which netted two podium finishes, it is the sound of the sport.

Asked how he feels the sport might be improved, the Toro Rosso driver told the official F1 website: "I think it's a bit the sound that needs improvement, and maybe a little more downforce.

"Normally if you speak to people and say 'F1', it is the noise they mention. Now we have F1 but with no noise. I think it's just part of F1 we should make the most noise of all cars, not GP2 cars."

So, other than the sound, what else has the youngster found difficult to adjust to?

"Just learning the car every race weekend," he admits. "I don't have a lot of experience of the tracks outside of Europe, so that's also a big thing. The team helps you a lot. It's just gaining experience - learning every phase of qualifying for example: how to get the maximum out of the tyres, how to set up the car from Q1 to Q2 to Q3."

Asked if F1 is as exciting as he expected it to be, he is in no doubt: "Of course! This is where I always wanted to be."

For the most part, those who thought he was being brought into the sport too young have been proven wrong, but how does he feel in terms of pressure and expectation?

"I don't feel less or more pressure," he insists. "To be honest I never really felt a lot of pressure, also at the start of the year. The first two races you take it a bit easier with overtaking - you want to finish races to get experience. When you get more confidence in the car you can do braver overtakes, and I think that's getting better and better all the time.

"The car is very good, very enjoyable to drive," he adds. "We are missing straight-line speed, but that's how it is and we try to make the best of it."

When the season resumes, Max, along with his colleagues, has a new start procedure to deal with, will that be an added pressure?

"It's the same for everyone," he replies. "You just have to deal with the rules. For me it's okay.

"It's always different, so you don't really have a plan," he says of start tactics. "I watch races from previous years, just to have an idea of where to go if this happens. In general you just hope to make a good start and from there on just anticipate what's happening in front of you.

Finally, his father is seen at every race, every session, is he generous with his advice?

"He already gave me a lot of advice since I was very young," says Max. "He's here to give me some tips, and he's always there to tell me 'it's a good day, but keep improving, keep working with the team.' He knows how it works. He's always there to stimulate me."