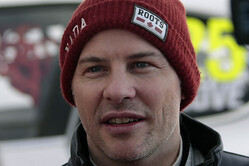 1997 world champion Jacques Villeneuve is to contest the second season of Formula E.

The Canadian, who will partner Stephane Sarrazin, made the decision to contest the series following a test day at Le Castellet last week.

"This is the first time in several years that I will participate in a full championship," said Villeneuve, who during his 10-year F1 career scored 11 victories and 23 podiums. Winning the title with Williams, he also drove for BAR, Sauber and Renault, and remains one of three drivers to win the F1 crown, the Indy 500 and CART title, the others being Mario Andretti and Emerson Fittipaldi.

"I am excited because the atmosphere while working alongside the Venturi team is great and that has a very big influence. Also I know Stephane Sarrazin well, we trust each other.

"It had been 10 years since I had driven on that kind of track with a single-seater," he said of the test, "but it's like riding a bike, you never forget. It was real happiness. There was a very good ambiance with the Venturi team and one of the engineers with Venturi happens to be a guy I worked with early in my career. That was great. I was very excited and everything went well. Last season each time I met drivers from Formula-E they were saying it is really a very interesting championship."

"It is a true pleasure to welcome the very great champion Jacques Villeneuve," said Venturi Automobiles CEO, Gildo Pastor. "He is the first Formula 1 World Champion to join Formula E as a driver. In addition to his 1997 title and his numerous victories in F1, no one has forgotten his victory in the Indianapolis 500 or in the IndyCar World Series. "He grew up in Monaco, we crossed paths so many times in childhood, so he will be at home with Venturi. I am very happy with the experienced and talented duo of Jacques and Stephane."

The second season of the Formula-E Championship will begin in Beijing in October.