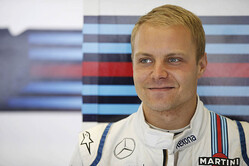 When making a mid-summer trip to the Hungaroring you can expect to endure temperatures in the mid-30s. For a driver in the cockpit of a Formula One car, this can be in excess of 60 degrees. Combining these conditions with the demanding barrage of corner after corner with very few straights for rest and you have the kind of situation Valtteri Bottas and Felipe Massa will be in during the Hungarian Grand Prix. Although moderately slow in Formula One terms with an average speed over one lap of 120mph, the slippery track conditions result in the circuit being a challenge the drivers relish. The end of the Grand Prix also marks the long awaited and greatly deserved summer break for drivers and team personnel alike.

Valtteri Bottas: Budapest is a great city and hosts a great race. There are a lot of Finnish fans living in Hungary, but also many who make the trip for this race weekend so I always have a lot of support - it's almost a Finnish Grand Prix. The circuit is very different from the last few because it's much tighter with more medium and slow speed corners, but our development has been focused on tracks like this and generating higher downforce. We should be looking to have a strong weekend and to build on the good momentum we have built.

Felipe Massa: Hungary is a special place for me. I have a lot of fans there after my accident in 2009 and since then the people have really got behind me which is great. Being so close to a city which has such fantastic culture really adds to the race weekend. This circuit wouldn't normally suit our car because it's quite low speed, but we have improved the car so much in recent races with the upgrades we have introduced so we should have another competitive weekend.

Rob Smedley: Hungary is tight and twisty, and is a low efficiency circuit in terms of aerodynamics but also has some high speed corners. The balance of the car is important as the long loaded corners tend to highly stress the front tyres and lead to graining, but you then go into the traction phase with hot rear tyres, so it's not easy to get a good lap in. The temperature always plays its part with hot ambient temperatures and this has an effect on the power unit and aerodynamic set-up. We enjoy staying in Budapest, a culture rich city with passionate race fans from all over the East of Europe.