2016 event will decide future of F1 in Germany 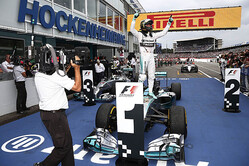 Despite all best efforts, including a generous offer from Mercedes to help underwrite the event, the German Grand Prix was dropped from the calendar just days after the season-opening Australian Grand Prix.

Consequently, for the first time since 1960, Germany, one of the leading countries in terms of the history of the sport, is missing from the 2015 calendar.

Last week the World Motor Sport Council announced a record 21-date schedule for 2016, and whilst Germany is back in place, Hockenheim managing director, Georg Seiler, believes the event will decide the future of the sport in the country.

"We need a well filled house next year so that Formula One has a future," he told DPA. "We must tell the fans: come to the race next year and secure the future of F1 at Hockenheim."

Saying he is "very optimistic" that the race will be well attended, Seiler says the circuit could even consider hosting the event in 2017 also if the Nurburgring's problems persist.

However, like most European promoters he fears for the future, ruing the fact that his circuit receives no help from the regional or federal authorities.

"It is very sad because Formula One is an image carrier all over the world," he said. "For other countries it is part of their tourism promotion, money comes from other areas and they can stage the races without problems."

Earlier this week, Mercedes boss Toto Wolff claimed that German apathy towards the event is due to fans' success fatigue.