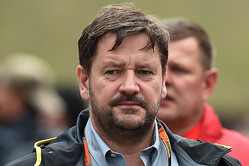 Once again, F1 finds itself in between a rock and hard place.

Following a number of races which have seen almost all teams adopt a one-stop strategy, the sport's powers-that-be are calling on Pirelli to create compounds for 2016 which will wear out quicker and therefore require more pit stops. This, so it is believed, much like the proposal to reintroduce refuelling, will help spice up the show.

However, with in-season testing reduced to just four days this year, a move aimed at reducing costs, Pirelli, whose current contract ends next year, will be unable to try any new compounds until the beginning of 2016.

Consequently, if the Italian tyre manufacturer is to satisfy the sport's demands, it requires more test days.

"We were having new requests all the time, even now, to maybe be a little bit more aggressive next year," Paul Hembery told Sky Sports News HQ. "The teams are saying we want tyres that are more aggressive, more grip, and that's a bit of a late request. That means we're going to have to ask for more testing at some stage because this sort of thing's a fine balance.

"You get it slightly wrong and you're on the one-stop races that you've seen in the last three (races) and people are complaining actually and saying we need the balance to go back a bit to where we were maybe a couple of years ago."

Pirelli's call comes ahead of the British Grand Prix, a race that in 2013 marked a watershed moment for the Italian manufacturer when a number of drivers suffered blow-outs including race-leader Lewis Hamilton, who eventually finished the race fourth.

Whilst the existing tyres were modified for the next race, in Germany, by the time of the Hungarian Grand Prix Pirelli had introduced a new specification tyre.