Symonds: It's in the genes 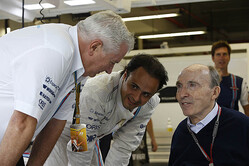 Pat Symonds believes that some drivers have F1 titles in their DNA, and that Williams star Valtteri Bottas is one of them.

Talking to the official F1 website, Symonds, who has worked with three of the sport's greatest - Ayrton Senna at Toleman, Michael Schumacher at Benetton and Fernando Alonso at Renault - was asked if Williams duo, Bottas and teammate Felipe Massa have the 'champion gene'.

"The first top driver I worked with was Senna in the 80s," he replied, "with Schumacher in the 90s and with Fernando in the mid-2000s - roughly ten years apart with each driver.

"Now we have again moved ten years on from first winning with Fernando, and we have Valtteri as the young guy many think is capable of doing it.

"Bear in mind that ten years is a lifetime in F1, so the actual requirements of a driver have changed significantly.

"You mentioned the word 'gene' - and I think there is something to this word. It is something in the sportsman himself that is a common factor. Actually there are several factors: not just the desire to win - everyone here has that desire to win - but some of them have that burning passion, the absolute belief that they can do it. I think that right now there are drivers out there who are damned fast, but they doubt themselves at times - and the minute a sportsman doubts himself he is already defeated.

"What I've seen in the great drivers I have worked with I also see in Valtteri," he admits. "He regards it almost as a right to be champion. There are other traits in the so-called 'champion gene' - like attention to detail and work ethic. These things don't come easily. In Valtteri I see all these things that I saw in the others over the last 30 odd years. So I have all the hopes that he will be a champion.

"With Felipe it is much more interesting assessing him. A lot of people know that Felipe was capable of winning a championship, because he very nearly did in 2008. After an accident in Hungary a lot of people thought 'well, okay Felipe, what a shame'.

“What we found at Williams is that we have awakened him - and it is not beyond possibility that if we build a good enough car, then Felipe can also win. In the latter part of the 2014 season he was a revelation. It was a Felipe that we haven't seen in years."