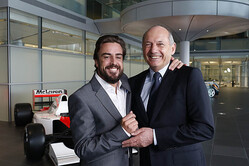 Fernando Alonso is to drive the new McLaren on the first day of pre-season testing it has been revealed.

The MP4-30, which will be launched online next Thursday (29 January), will take to the track at Jerez on Sunday with Fernando Alonso at the wheel.

Jenson Button will take over on Monday before handing back to his Spanish teammate on Tuesday. The final day of running will see Button back at the wheel.

McLaren is sure to be the centre of interest in Jerez, for not only does the team welcome back Honda, with which it enjoyed almost unparalleled success in the 80s and 90s, it also welcomes back Alonso, that particular relationship ending somewhat differently.

Whilst the team had little running in the post-season test in Abu Dhabi, when Stoffel Vandoorne was in action, the team has been buoyed by the news that Honda can now modify its power unit beyond the original 28 February deadline.