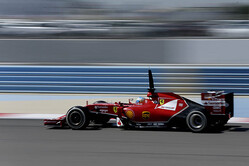 In an attempt to cut costs, there will be just two in-season tests this season, one at Barcelona following the Spanish Grand Prix in May and the second two days after the Austrian Grand Prix at the Red Bull Ring.

This is down on the three tests in 2014, which followed the Bahrain, Spanish and British Grands Prix, but up on the sole test (Silverstone) of 2013 which was mostly devoted to upcoming drivers.

At this year's in-season tests all teams must allocate two days to running 'young drivers' - though the new points based super licence criteria probably means that this will be the only F1 running they get for some time.

In addition, each team is allowed to carry out two promotional events - for marketing or promotional purposes (filming) - but this must not exceed 100km in length and only tyres manufactured specifically for this may be used.

The 2015 regulations stipulate that the three pre-season tests must be held in Europe. For reasons known only to those involved (and we can but guess) two of the pre-season tests took place in Bahrain last year, great for guaranteed hot, dry weather but ludicrous when it comes to ferrying in updates and spares... not to mention the lack of wet-weather running.