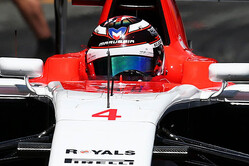 The chances of seeing Marussia in Formula One next year have been dealt a blow as administrators for the collapsed team have revealed that "despite extensive discussions, no satisfactory offer or strategy has been offered to presently allow racing to continue."

The Banbury-based team was launched in 2010 but only managed to score two points since then and finished this year in ninth place. It went into administration at the end of October and earlier this month started to sell its assets at auction. However, in early December, its sporting director Graham Lowdon reportedly said that although it would have to find new equipment and transporters, this does not necessarily spell the end of the road for the team. Documents from administrators FRP Advisory reveal the obstacle in the way and lay bare the true extent of the financial damage which drove Marussia into the wall.

Writing in the Daily Telegraph, Pitpass' business editor Christian Sylt reports that the team made a net loss of £11m in 2013 and lost a further £29.2m in just the first eight months of this year. Even its GP3 team was a drag on resources and lost £180,000 last year.

According to FRP, Marussia owes a total of £31.4m and the list of more than 200 companies which will lose out reads like a roll call of the great and the good in Formula One.

At the top is Ferrari, which is owed £16.6m for supplying engines. Next up is £7.1m due to McLaren for providing wind-tunnel and simulator services.

Other high profile names on the list include computer company Dell, which is owed £400,000, delivery service DHL, which is due £48,000, the Shanghai International Circuit, Circuit de Catalunya in Barcelona, the Korean Grand Prix and even the FIA.

However, the greatest impact will be felt by the majority of Marussia's other creditors who are small and medium-sized businesses which supply key services to the sport. Catering firm Freeman's Hospitality is owed £660,000 whilst German wheel manufacturer BBS is due £41,000. None of them are on track to get their money.

According to FRP, just two of the creditors are secured, which means that they will be paid first when money is distributed from the sale of the team's property. The other creditors would only be paid if there is money remaining after the secured debts have been cleared. The outlook is grim as Geoff Rowley, managing partner at FRP, says there is "insufficient property to enable a distribution to be made to unsecured creditors."

The most significant secured creditor is Lloyds bank and even it is set to take a hit of more than £10m on the money which Marussia owes it.

The team was set-up with funding from the bank's private equity division, Lloyds Development Capital (LDC) which became its majority shareholder. As Pitpass revealed, in April 2013 LDC sold its stake to Marussia, the Russian supercar manufacturer which the team is named after. This news was followed by our revelation in October last year that although LDC had sold its shares in Marussia, the team still owed it around £10m. The documents from FRP reveal that the loan and interest from LDC come to precisely £13,157,838.55 but the estimated payout will be at most £1.6m. Accordingly Rowley says that "the secured creditors will suffer a significant shortfall."

Interestingly, one of the unsecured creditors is Capsicum Grand Prix, the investment vehicle controlled by businessman Grahame Chilton who is father of driver Max Chilton. Capsicum is owed £3.1m and, according to the documents, provided the team with £7m every year.

Its main source of funding was investment from Marussia's ultimate owner, Russian businessman Andrei Cheglakov, who is said by some to be a billionaire. However, the documents reveal "it was apparent to the directors that Andrei Cheglakov was not able to inject sufficient funds to pay all historical creditors."

It is a far bleaker view than the one presented by The Times newspaper in October last year which stated that "the team's investors - led by Andrey Cheglakov - have moved to clear £130 million worth of debt to put the team on an even keel for the coming year...With a Russian Grand Prix scheduled for next season, the squad, based at Banbury in Oxfordshire, are possibly the most confident of F1's minnows."

The confidence was misplaced as Marussia ended up missing the last three races of the 2014 season after going into administration. Rowley says he has been advised that "on a close down break-up basis, realisations of assets would be in the region of £1.5m." In addition, there is £670,000 of cash in the bank which gives the approximate total of £1.6m that LDC could receive. Time will tell whether the team manages to generate any more.