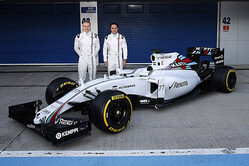 The Grove team is looking to build on a successful 2014 campaign where the team achieved nine podium finishes and finished third in the Constructors' Championship.

The team showed strong development throughout the season and aims to continue this as the regulations show minimal changes for the season ahead. There are however a few differences between the FW37 and its predecessor.

The new rules see changes to the front nose box and bulkhead of the car, a move away from the rule that saw so many different variations of nose throughout the 2014 season.

Commenting on the new FW37, Team Principal and founder, Sir Frank Williams, said: "After such a strong season in 2014 we are looking to continue the move back towards the front of the grid. The move from ninth to third was a tough challenge, but ultimately every step up from now on will be even harder. I am confident that we have the appropriate personnel and talent in this team to make those steps.

"We have an experienced driver line-up, with both drivers finishing on the podium throughout last year and hungry for more success in 2015, new commercial partners to add to the continued support from our already impressive roster, and have a technical team that is amongst the best on the grid.

"I am looking forward to seeing the car in testing and assessing how other teams have fared over the winter in comparison to us. We should, once again, have a very exciting season ahead of us which will hopefully bring more success to Williams."

"The momentum we carry from last year has been very encouraging," added Felipe Massa, "the team has changed so much from 12 months ago and it is clear to see everyone is heading in a good direction. The development rate of the FW36 was one of the most exciting elements to the car, the team worked exceptionally hard throughout the year to make sure that we had a faster car at each race, and I look forward to a similarly impressive car this year. I am excited to be continuing to work with Valtteri, a driver with so much talent who has so much to offer both the team and me as his teammate."

"Coming into a season after third position in the Constructors' Championship carries the weight of a lot of expectation," admitted Valtteri Bottas. "Other teams and our fans are expecting a performance like last year, and all the personnel at Williams have been working tirelessly to make sure this is not only achievable but the benchmark for improvement. For much of last year we had the second fastest car, and this year we plan to take every opportunity to challenge at the front. After my first podium in 2014 I hope to continue developing as a driver as I aim for my first win. I look forward to working closely with Felipe again this year as we strengthen our relationship to extract the most from the car."

"The team learnt and developed a lot in 2014," said Claire Williams, the Grove outfit's Deputy Team Principal, "and this has made us a better team and well prepared for the challenges that face us as we head into a new season. We are all eager to see where we are in comparison to our rivals. We have worked hard over the past six months to get this car ready, but it is in no way the final product, we have a lot of work to do throughout the season as we push for constant improvements in performance. I am incredibly confident in the team around me and the line-up we have that 2015 can make it another successful and exciting year for Williams Martini Racing, and now can't wait to get back on track."