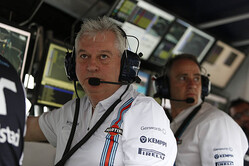 Pat Symonds has played down his own significance in Williams incredible resurrection, saying he merely made better use of the people there.

It's fair to say that both Symonds and Williams have enjoyed a remarkable turnaround. While the Grove outfit had suffered a run of dreadful seasons that suggested the former champions were destined to follow the likes of Lotus (the real Lotus) and Brabham, the Briton had only just returned to the sport having been banned for his role in the infamous 'Crash-gate' saga at Renault.

After a short spell as consultant to Marussia, in mid-2013 Symonds joined Williams, replacing Mike Coughlan as Chief Technical Officer. Thus far neither party has looked back.

In an interview with the official F1 website, Symonds was asked to reveal the secret of the Grove outfit's resurrection, minded that Claire Williams says much of the credit goes to him.

"When I arrived at Williams I saw that we had some really good people but they weren't very organised," he admits, "so a lot of the efforts were going to the wrong places.

"What I think I've done is not to tell them how to design a car, but outline 'this is how to work'. When I then saw people working together I started to think about performance.

"There might now be a bit more discipline in how Williams works and people are much more productive now," he adds. "I have not achieved any miracles - it is down to the fact that I had really good people when I arrived and I started to use them properly. That is what made the difference.

"In the mid-90s when I was at Benetton my main rival was Williams," he admits. "So, I was a bit surprised when I arrived at Grove to find there were certain aspects that had not really moved on from these days. Not so much technically - the main thing was attitude. The attitude hadn't moved on. That surprised me. There was more to do than I had expected when I arrived."

Asked about the main challenges he faced in turning the team around, he replies: "Communication is one. I put the emphasis on car/team performance rather than wind tunnel performance, and these kinds of things. And the third thing is to empower people to make decisions without fear. These are the three most important aspects of getting Williams back on its feet."

Of course, after being banished from F1 for almost two years, it must have been difficult to keep up to speed.

"Yes it is hard to keep up," he admits. "I spent one and a half years doing nothing - or very little - concerning Formula One. In that time there have been massive rules changes. But when you stand back and look at things you probably see things that you had not thought of previously which are now very clear. So you gain a bit and you lose a bit.

"Of course if you do shut down for any period of time it is difficult to come back, but I have always been someone who is looking out for things and trying to keep up with things - so the comeback was not really so much of an issue.

"I am enjoying being with Williams. It is a great team. Yes, of course it's nice when you are in demand - but to be honest, I do things that I want to do. And I like working here, I like the people and I like what we are trying to achieve. I am happy here."

While he was officially a "consultant" at Marussia, he was widely seen as replacement for Nick Wirth who had relied solely on Computational Fluid Dynamics (CFD) in the design of its cars, a process that means no need for wind tunnels during the design or build process. Currently the design process is moving further and further towards the virtual car and the windtunnel, a direction that Symonds is not totally in favour of.

"There are times when people are too locked into simulation and the wind tunnel without really thinking 'what does it mean to the car on the track'," he says. "I think I brought a little bit more integrity to what we do - to focus on the performance of the real car.

"As an example: it is better to have a slightly lower number in the wind tunnel if it is a consistent number. We go from the virtual world back to the real world as the virtual world is part of engineering - but the focus is also on real track performance."

A significant part in Williams 2014 resurrection was undoubtedly the Mercedes power unit. When asked if he fears the German manufacturer might opt to offer a slightly lesser version to its rivals, Symonds is philosophical.

"We know that we get the same power unit," he says. "The rules dictate that all power units have to be the same. Physically the hardware is exactly the same.

"How we use the engine is very much down to us," he adds. "So it is down to our engineering skills and judgment of risk. I am very happy with the power unit we have and the relationship we have with Mercedes."

And what of the current talk of 1,000bhp engines, is he in favour?

"It is possible to have these kind of cars - and not even particularly difficult," he says. "I would not say that I am dreaming about such a car - but then I am realistic, not a dreamer.

"At the moment what we need is to provide a decent business solution and not lose teams because it is so expensive," he continues. "These are far more important concerns. 1000bhp cars - great, good fun! But is that the right thing for F1 at the moment? I am not sure. I think what we've done with the power unit for 2014 was absolutely the right thing to do - probably we didn't make enough of it.

"1000hp cars are not an instant cure," he warns. "The Toyota Le Mans car has also 1000bhp, and it is not more spectacular than a Formula One car. Last year we had some great racing, so let's concentrate on racing and not follow wishful thinking."

And looking ahead to this season...

"What I realistically want to see is us maintain and improve where we are. Last season was a great season coming in third. It was a bit of a shame that Williams didn't win a race along the way, so it would be nice to win this year. And I think we can finish in the top three again. I set myself aspirational targets and my aspiration target for this season is being better than we were in 2014.

"I have got another championship in me before I retire!" he adds.