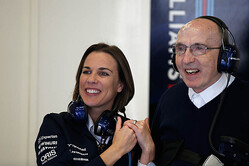 Claire Williams has revealed that her team is supportive of Manor's return to the grid, even with a 2014 car.

As the furore over the Strategy Group’s decision to block the British outfit taking to the grid in a 2014 car, despite having agreed such a move last year, Williams team boss Claire Williams has revealed that her outfit sides with the minnows.

"We've been very clear on our position around Marussia and their entry," she told Sky Sports, "we want a full competitive line-up on the grid, and we will do anything to support Marussia coming back in."

Thus far, of the six F1 teams on the Strategy Group - Force India replacing Lotus this year after finishing sixth in the Constructors' Championship - only the Silverstone-based outfit has admitted to blocking Marussia's return. Deputy team principal Bob Fernley claiming that the resultant negative attitude towards he and his team being because it was first to vote - under a system that requires unanimity.

"We made it very clear in the Strategy Group that we would vote for them to be able to use the 2014 chassis this season," said Williams. "Unfortunately it hasn't happened but Williams want a competitive line-up on the grid and we want to help the smaller teams."

Williams, which started life as a private entrant before graduating to building its own cars, thereby becoming one of the Garagistes as Enzo Ferrari famously described them, has not forgotten its roots. Indeed, in recent years it has undergone its own struggle to survive.

"We are what I call a middle team, not a small team," said Williams. "We go racing based on the sponsorship budget that we can generate, coupled with the prize money that we get.

"But it's a hard fight. We've got to generate £60m a year in sponsorship to keep our team racing. To be competitive in F1, I don't believe that you need to spend £200m a year, you've got to work harder and smarter than anyone else if you've got a smaller budget, but it's so hard to generate that income."