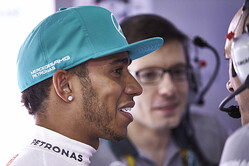 Mercedes AMG Petronas began the Singapore Grand Prix weekend at the top of the time sheets, with Lewis Hamilton setting the fastest time of the day during the second session.

Lewis and Nico ended the first session in P2 / P3 respectively - separated by just 0.27 seconds. The second session saw Lewis set the fastest time of the day while Nico was forced to abort his flying lap owing to red flags. The Pirelli soft tyre was used exclusively during the first session, the soft and supersoft during the second session. The team completed a total of 102 laps on a trouble-free day for both cars.

Lewis Hamilton: Today was a work in progress. We made some changes between P1 and P2 and, whether it was those changes or the track itself, the balance didn't feel right. It felt like we lost a bit of performance but we'll look into the details and see what it was tonight. The long run was okay - I had a bit of traffic which wasn't ideal, as when you back off to rebuild the gap the tyres come back to you a bit which may not give an accurate picture of exactly how long they will last. Pole here has always been very important. The right side of the grid, for example, always seems to get the better starts. Being up at the front will be crucial and that's obviously my target for qualifying tomorrow. Nico looks very quick, as do the Ferraris and the Red Bulls, but I'm feeling good this weekend and I'm focused on the job.

Nico Rosberg: I had a good feeling in the car. The only pity was that I had to abandon my quick lap due to the red flags. Although I didn't get the second part of that lap, though, in the first part the car felt great. We then decided to do more laps on high fuel to learn more for the race and overall it was okay. It will be difficult with tyre degradation on the softer tyre so we still need to work on that. But it's generally a great challenge driving here. This is one of the most difficult tracks out there but to fight through all the curves and bumps - especially with this amazing Silver Arrow - is a great feeling.

Toto Wolff: The track conditions looked pretty difficult for both sessions and it took a while to dial the car set-up into that. In the second session Lewis wasn't happy with the car on the prime tyre, while Nico lost his chance to set a time on the super soft tyre as he had to abort his quick lap when the red flags came out. So not a perfectly smooth afternoon but we managed good long runs today on the prime and the option tyres and there is plenty for us to work on tonight. Our rivals are looking strong and we know we need to be on top of our game to stay ahead of them tomorrow and on Sunday.

Paddy Lowe: Generally we enjoyed pretty good and reliable sessions with both cars - although Nico was happier with the car in the second session than in the first and vice-versa for Lewis. We saw a bigger performance gap between the prime and option tyres over one lap than we had expected, which will certainly require some consideration in terms of race strategy - as will tyre management, which will undoubtedly be a big factor on Sunday. We still have a lot more homework to do in order to fully understand the tyres, the race strategy and also to maximise the potential of the car. But a good start to the weekend and great to be back in Singapore.