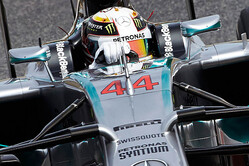 While the greenness of the Hockenheim circuit might account for some of the many offs and lock-up we witnessed, many believe the most likely culprit to be the controversial FRIC systems - or rather their absence since no teams are running them.

Tyres available this weekend are soft (prime) and supersoft (option) while the two DRS zones are 60m after T1 and 260m after T4.

While the circuit is expected to suit the Williams, Felipe Massa and Susie Wolff were 11th and 15th this morning.

Even more disappointing was the Lotus duo with Grosjean and Maldonado managing no better than 17th and 18th.

Then there was Force India, where Hulkenberg and Perez could only manage 13th and 14th.

Raikkonen lost time due to a water pump problems however, Ferrari honour was upheld by teammate Alonso who finished third overall.

Many believe the circuit and the FRIC ban will play into the hands of Red Bull, and based on the early signs they could be right, Vettel certainly looking good on his longer runs.

Another team that might have benefited from the loss of FRIC might be Sauber, where Sutil and Van der Garde, replacing Gutierrez in FP1, finished 10th and 16th.

This afternoon, Gutierrez and Valtteri Bottas, who was replaced by Wolff, are back in their cars.

The lights go green but with no 'free' tyres available there is no mad rush to get to work.

After a few minutes the Caterham duo head down the pitlane followed by Gutierrez. In the Red Bull garage Ricciardo appears to be re-enacting a move from Dirty Dancing, much to his engineer's embarrassment.

Having posted a 25.361, Ericsson grinds to a halt ion the straight connecting Turns 1 and 2. As the yellow flags are waved his car is pushed to safety.

Replay shows the car slowing shortly after T1 and Ericsson being told to stop the car as it is overheating. "Slow down, cool the engine," comes the call. Then; "Stop the car! Stop the car!"

As more cars take to the track the order is constantly changing, Button, Magnussen, Gutierrez and Maldonado all take their turn at the head of the timesheets until Raikkonen bangs in a 20.263.

Fifteen minutes into the session, Rosberg is the first of the Mercedes drivers to appear. The Red Bull duo, Alonso, Bianchi and Massa have also yet to leave their garages.

Rosberg's first flying lap sees the German go straight to the top of the board (19.729), ahead of Raikkonen, Kvyat and Bottas. Hamilton posts 27.750 as he searches for a clear piece of track.

Whilst Raikkonen goes quickest in the first two sectors before heading into the pits, teammate Alonso is also told to pit his team having spotted a problem but not knowing exactly what it is.

Twenty-three minutes into the session all but Alonso have posted a time.

Cars continuing to lock-up and run wide, Sutil and Grosjean among the latest.