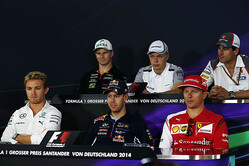 Nico, if we could start with you. Points in every race so far this season, only you and [Fernando] Alonso have managed that so far and you're seven to two against your team-mate in qualifying. How positive is that for you and how do you think that is perceived within the Formula One paddock?
Nico Hulkenberg: I think it's very positive in general. I think it's a very good achievement to have scored points in every race - probably Nico and Lewis would have been the same without the technical failures. I think it has been a very positive start to the season, first half, many, many points, much better than we expected going into the season and I think that is also the perception of the paddock. However, we're only in the middle of the season and there's still a long way to go before the end and our aim is to get the fourth position in the Constructors' Championship. We have a big challenge on our hands there against Williams, McLaren and many others. I look forward to that.

You've largely been fighting for fifth and sixth places in races this season but just recently, the last couple of races, it was more like eight and ninth. What brought about that change and where do you think you'll be fighting this weekend?
NH: I think Silverstone was overall a bit difficult for us. The track didn't suit us so well, plus the conditions made it even more difficult. Therefore, it was still a very good achievement to get points on the board there. In Austria we were a bit compromised by a few issues, which we found out after the race, otherwise that could have been better. So hopefully here we'll be back to bigger points but it's difficult to know. Obviously it's very hot this weekend, so it will be interesting to see how the tyres behave and who will manage it the best.

Kevin, coming to you, points in the last four grands prix for you, six points finishes in total this season with one podium but McLaren still seem to be quite up and down dependent on circuit, why is that?
Kevin Magnussen: It's difficult... it's a good question. It's something we don't really quite understand 100 per cent, but surely it has a lot to do with tyres, they behave quite differently race to race. I think we are improving, the car is improving, we're putting downforce on the car at nearly every race so I think we're moving in a positive direction.

We're coming up to the summer break and there's a lot of talk about the driver market - as there always is at this point. Where do you think you stand with regard to staying at McLaren next season.
KM: I can only do my best and hope that is good enough. Anyone at McLaren should feel that you have to deliver to your best to deserve to be there and that goes for me and Jenson as well.

Kimi, the first question has to be how are you feeling after your accident at Silverstone, any after-effects and what happened?
Kimi Raikkonen: Well, I crashed, I guess you saw it. No, I had some pain but it's all fine.

Just in your leg?
KR: No actually it was in my ribs the most, that's why I didn't do the test, but it's all gone away now.

Many things have not gone the way you expected them to this season in your rejoining Ferrari, but can you tell us what has gone the way you've expected it and what positives you've drawn so far?
KR: We've been in every race at least. That's what you expect at least. It's been a difficult year, hopefully it will turn around at some point - it must, it cannot go much longer like this, it's not fun. But this kind of thing has happened to me before and we always managed to turn it around, so I have a strong belief it will turn around. We have to just fix issues and get things as I want and I'm sure we can be back where we should be.

Nico, coming to you: a new contract extension with Mercedes, congratulations on that, you also got married since we last saw you, but you've never been on the podium in Germany, I see from your record, so I guess that's this weekend's first objective. You're still on top of the championship, just four points clear, but your team-mate Lewis Hamilton said that this is a 'reset moment' in the title race and that he's been on the back foot all season. How do you see it?
Nico Rosberg: Yeah, it's been a very exciting week for sure. We also became world champions, which was awesome. In terms of the championship, how do I see it? I just see it as the next race, which is Hockenheim. It's our home race. I really look forward to driving here. I'm here to win, of course. I'm here to try to extend the championship leads. That's where it ends for me. I'm really just looking at the moment, taking it race by race.

As you say it's been a great week for Germany on the sporting front. As a keen follower and friend of the national team is there a way you can harness some of that positivity into your challenge this weekend?
NR: The effort of the team as a whole, how they all played together and everything was really great to see and that's what won them the tournament I think, not any individual strength or anything. That's what we're trying to do as well, to really work well, everybody together, to really make the most of it. I think we're also on the right track with that, in that respect, because to dominate the sport as we are doing at the moment, I think that indicates we work pretty well together as a team and of course there's room for improvement but we're going in the right direction.