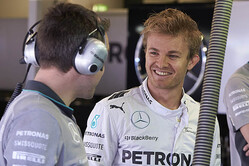 Nico Rosberg and Lewis Hamilton took a hard-fought one-two victory this afternoon at the Austrian Grand Prix to make it six one-two finishes in the opening eight races of the season - a feat only achieved once before in Formula One history.

Nico claimed his fourth win of the season and eighth consecutive podium after starting third on the grid. Lewis finished second after gaining seven places, securing the team's sixth one-two finish in the 2014 season. Both drivers ran two-stop strategies, running a tyre choice of option/prime/prime. Seven of the top ten were powered by Mercedes-Benz and this was win 106 for Mercedes-Benz power in Formula One.

Nico Rosberg: That was an amazing weekend for us here. It was so great to be back again in Austria - for me, it felt almost like being at my home race in Germany! This is a great track, with amazing fans and at the end also with a great result for us. I have to thank the team for a great car and a perfect strategy. We chose the aggressive way to pit earlier and to overtake the Williams that way and that worked out quite well. We had to look after our brakes, which was a big job for the whole race. Also this worked out perfectly for me. Before the weekend, my target was to extend the lead in the championship, which I achieved. So I can be quite confident before the next home race for our team in Silverstone. A great job also from Williams, they were the second force today. Congratulations to them.

Lewis Hamilton: After what happened yesterday in qualifying, today was all about damage limitation for me, so I'm as happy as I can be with a P2 finish. I have had the pace in the car all weekend here but I wasn't able to capitalise on that, so getting second place from a bad weekend is pretty good, I guess. I had a rocket start - it's something we've be working hard on all year and it was one of the best I've ever had. You can't ever plan what's going to happen but I managed to put the car in all the right places and climb to P4 by the end of the first lap. We were managing the brakes a lot today, because I was in traffic for most of the race and it was the most important thing to bring the car home, so that was a real balancing act. But the strategy worked really well for me to get into second position, then I tried to start pushing Nico - but he didn't make any mistakes and I didn't have the chance to overtake. The guys did a fantastic job today to get us another one-two and the fans here in Austria have been insane. Next race is in Silverstone and all the positive energy from my home fans; it will be a special time and I'll be going all out for the win.

Toto Wolff: A fantastic result for us here in Austria and we are just delighted to get a one-two finish today. The race was all about management: managing the brakes because this is such a tough circuit for them, and also looking after the Power Unit to make sure we didn't have any repeat of the problems in Canada. Nico and Lewis did an incredible job - a controlled drive from Nico, where he let the race come to him and let our strategy play out, which worked really well; then a really typical dynamic drive from Lewis, who just did an amazing first lap to climb from 9th to 4th. After that, the guys pushed each other hard but we made sure to bring the cars home, too. It's a great day for the team to take another one-two finish and congratulations, too, to our partners at Williams, who made it four Mercedes Benz engines in the top four this afternoon.

Paddy Lowe: We woke up this morning knowing that we had a big job to do today given our less than ideal qualifying positions. We had a lot of work to do with the strategy to get the cars to the front. Both drivers had great starts and a good first lap, particularly from Lewis which meant we were in P3 and P4 after lap one. Behind the scenes we were doing a lot to manage the condition of the car during the race, at the same time as running a strategy to overtake the Williams, who looked to have very strong pace today. To finish where we did is a credit to the whole team. Well done to Williams for getting P3 and P4 and congratulations to Mercedes-Benz for securing seven out of the top ten positions with no retirements at this particulary demanding circuit.