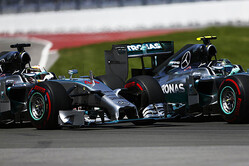 Reminded of his previous crackpot claim that Bernie Ecclestone was about to step down, Glen 'Crompo' Crompton hastily changes the subject to what was actually an entertaining Canadian Grand Prix.

Once again Crompo and Mat Coch fail to agree, this time over the penalty dished out to Sergio Perez following his final lap clash with Felipe Massa. With Coch on one side and Crompo firmly on the other the pair duke it out before editor Balfe is forced to calm the debate… not that we ever thought the words 'Balfe' and 'calm' would appear in the same sentence.

On the whole it was a race which rejuvenates the championship according to Balfe while Crompo likened it to a well-written Hollywood blockbuster. Indeed, having admitted that he'd read the Pitpass race report before seeing the race, editor Balfe suggested that for Crompo the race must have been akin to an episode of Columbo, whereby the intrigue is in how the ending is reached rather than the ending itself.

With racing up and down the field, and a breakthrough win for Daniel Ricciardo, it was a fine advertisement for Formula One and proof that nice guys don't always finish last.

What really gets the trio riled up however are the proposed changes to Friday practice sessions. As a collective the team pans the idea, labelling it bad value for fans and poor decision making from the Strategy Group underpinned by ineffective marketing from the sport.

The slightly longer show gives Crompo an opportunity to draw comparisons between Alain Prost, Ayrton Senna and the Mercedes driver pairing. Crompo sees a degree of Alain Prost in Rosberg's drive to second spot, a view shared by Balfe, as he lauds an underrated, analytical drive from the German.

As the championship moves in to the middle third of the season, the Mercedes advantage is not quite what it seems the team suggests. A retirement in Canada gave a glimmer of hope to the Brackley outfit's rivals while injecting renewed interest in the Drivers' Championship, leaving things nicely poised heading in to the Austrian Grand Prix next time out.