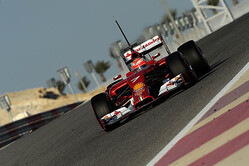 The Commission, which met yesterday to discuss a number of issues before they were due to be rubber stamped by the World Motor Sport Council next week, rejected plans to reduce Grand Prix Friday running from two sessions down to one.

When plans to change the format were first announced they were widely ridiculed by fans who want to see more running over race weekends not less.

The Commission has also thrown out plans to ban tyre blankets - a move due to be introduced in 2015 - with Pirelli now agreeing to pay to place its logos on the blankets which should further reduce costs to teams... but not for Pirelli.

The move will be warmly (sorry) welcomed by drivers who had voiced safety fears over the move indeed, according to the Commission costs and safety were the main issues behind the decision to reject the ban.

Finally, as previously reported, pre-season testing in 2015 will be limited to three four-day tests, all in Spain, while in-season testing will be halved from eight to just four days.

The driving force behind all the original proposals is money, the Strategy Group looking to cut costs by means of the regulations rather than having the FIA impose a form of budget cap.

The Strategy Group consisting of Bernie Ecclestone, the FIA and the wealthiest teams.