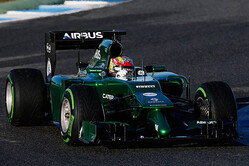 Main challenges of Sakhir for the Power Units: "As a modern track with an equal balance between straights and tight corners, Sakhir is a fairly medium-demand circuit. A smooth, neutral PU set up will really pay dividends as some of the corners - particularly in the back section from T4 to T9 - roll into each other. As at all tracks, the challenge is to have the correct balance between energy management and driveability. We also need to play particular attention to the cooling since the Bahrain desert can reach up to 45°C. With cooling requirements already at a premium with the high rotational speeds of the turbocharger and MGU-H, adding extra external temperatures will make engine cooling a priority task on the job list.

Main energy recovery points: "The four straights - the 1km pit straight, 500m between turns three and four, the short burst linking T10 and 11 and then the final drag from T13 to T14 - will give plenty of opportunity for the MGU-H to recover energy from the exhaust since the ICE will be working at full revs for around 50 - 60% of the lap. The twisty back section from turns four to eight and 11 to 13 have several heavy braking points, plus the corners at the end of the straights allow the MGU-K to keep the battery reserve at high charge. The circuit is therefore in the middle of the table on the balance between electrical energy and fuel."

Difficulty rating: "Medium. The temperatures increase the difficulty but the circuit itself is average."

What to watch out for: "The winter testing period included two tests in Bahrain, which were pretty difficult at the start for the team and Renault but improved throughout and finally saw Caterham record a good percentage of Renault's total mileage over both tests. This time we will come back with a lot more mileage under our belts, including two full race distances in GP conditions, which gives us a lot more confidence and information going forward. There are still some small issues but right now we are concentrating on performance rather than trying to go for reliability."

Kamui Kobayashi: "Next it's back to Bahrain for race three, back at a track we've already spent a couple of weeks at this year in the pre-season test where we managed to build up some pretty good mileage at a time when our reliability was good, something that will be really important this weekend. We also now have something to build on, both in terms of performance and from where we are now, in tenth place in the championship and with targets ahead that we know we can race with.

"Reliability really is the main focus for Bahrain. We need to have three good practice sessions so we can go into qualifying and the race with an optimised setup giving us the chance to really find out what the real performance level of this car is. On my last day of the test in Bahrain we weren't able to do the final performance run because of a clutch issue, and we really haven't had a chance since then to run the car in full quali spec with optimised setups because of the reliability problems we've had, and the wet quali sessions we had in both Australia and Malaysia. Yes, we performed well in Malaysia for much of the race, but that was with a car that had almost no meaningful setup work done on it and with more still to come from the power unit. It's vital we have a full weekend so we can pick up where we left off in Sepang and continue to improve across all areas of the car's performance.

"Our ability to develop is what will be crucial this year. Our development program is starting in Bahrain with the first new parts coming from the work we've been doing in the TMG wind tunnel and it'll be good to see how they perform."

Marcus Ericsson: "I left Malaysia feeling pleased that I'd finished my first full race, and excited about what we achieved on Sunday at Sepang. It was tough - even though we'd completed quite a few laps on Friday and Saturday, we still went into the race without an optimised setup due to the issues we had on Friday and the work we had to do overnight to rebuild the car on Saturday and Sunday, so the most important thing in Bahrain is to have a trouble free weekend. Also, the Bahrain circuit characteristics should suit our car better than Sepang so we may be stronger here than in Malaysia, relative to the competition.

"I obviously know the Bahrain circuit well after the tests and, like Malaysia, that means we can get on with the program right from the first laps in FP1. We have a lot of data that's helping us go to the race with a much clearer idea of where we want to go with setup than we've had in either Australia or Malaysia, but it would also be really helpful if we can have the sort of reliability we had in the second pre-season test - mileage is what will help us unlock the full performance of this year's car, and I know how hard both Renault and our team are working to make sure we can do that."

Robin Frijns: "I'm excited about being back in the car for my first FP1 of the 2014 season with Caterham, especially as I already have experience of the car at Bahrain from the day I did in the pre-season tests. It'll be interesting to see how much progress we've made across the whole car since I last drove it, but my focus will be on helping the team prepare for the race weekend, something I know I can add value to, assuming we have a problem-free session!

"After the race weekend we're staying on for the first of the in-season tests and I'm doing one of the two days of that test. Obviously that's a different proposition to an FP1 - quite a lot less pressure, more time on track and a much bigger runplan, but it's still really important to approach that day with the same focus and determination to do as well as I can for the team. It's another chance for me to continue to learn as much as I can about operating efficiently with the team on track, building on the work I've been doing with them in the simulator back at Leafield, and I can't wait to get back to work!"