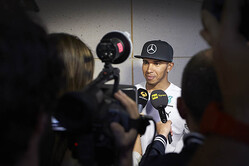 After a gruelling winter of testing, in which almost every team struggled at some point, the Formula One fraternity has touched down in Melbourne. It's a nervy paddock as many teams face an uncertain or uncompetitive weekend while fans will experience the sport's newest formula for the first time.

The most notable difference will be the noise or, more to the point, the lack of it. Around Albert Park there are those who joke that the loudest car this weekend will be Paul Stoddart's two-seater Minardi as it runs hot laps for the privileged few. The scream of the engine can be heard throughout the city while in the garages mechanics no longer bother with ear plugs.

What is also almost certain is a changing of the guard. Red Bull's cast iron grip on the sport looks to have gone somewhat rusty with Mercedes the early favourite. The question not being whether a silver car will win but by how many laps. The next question is how many cars will make the finish, with some predicting at least one car won't even make the grid.

It is expected that half a dozen or so cars will not see the chequered flag on Sunday evening, something which became unfamiliar in an era of ultra-reliable Formula One cars. Over the course of the year things will improve but it looks almost certain that in the early races it will be difficult to predict the outcome beyond perhaps the first four positions. That's good news for Marussia and Caterham who are both yet to score a point after four seasons in the sport.

Williams too looks in good shape, if not quite as good as Mercedes. Brandishing its new Martini sponsorship, a deal which is the envy of the pit lane, it looks to be in its most competitive position in years. With the experienced Felipe Massa leading the charge, clearly rejuvenated since his departure from Maranello, the team is a strong contender not only for points but podiums. Force India too looks a dark horse with McLaren there or thereabouts.

Both Red Bull and Lotus look to have produced strong cars though both appear to have been let down by Renault, for whom the less said the better.

In the Ferrari engine department there will be one or two furrowed brows. While the engine is somewhere on a par with the Mercedes it is believed to be far thirstier, which may not be a problem in qualifying but will be come the race. After blasting away from the start it's understood the Maranello drivers will need to dial down the power so they've fuel in the tank come the end of the race.

And that will be the biggest change, aside from the noise, for 2014. Gone are the days where drivers would sprint from pit stop to pit stop as the sport returns to a style of racing we became familiar with in the 1980s. Fuel economy, in the early part of this new turbo era, remains paramount and will dominate early discussions. It will make for unexciting racing but in time teams will get on top of it in their quest for performance.

For now we can look forward to an unpredictable race where drivers are burning fuel for track position before turning down the engine to reach the finish. The disparity between cars will be, at times, enormous and for drivers and teams it will take supreme discipline not to be dragged in to a battle that will leave them dry before the end of the race. Things will improve in time but it will make for frustrating racing for many, and something fans will have to be patient with during the early part of the year... or perhaps longer.