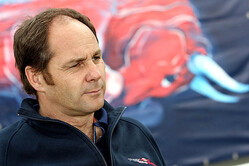 It is understood the Austrian was injured last Thursday, almost two months after the accident which has left seven-time world champion Michael Schumacher fighting for his life.

Details remain sketchy but it is understood that Berger, like Schumacher, was skiing off-piste at the time of the accident , the former Ferrari, Benetton and McLaren driver colliding with a drainage pipe.

Thankfully, his injuries were not life threatening and according to the St Johann am Tirol, the hospital to which he was airlifted following the accident, he was released at the weekend.

"He's very good. He is on the road to recovery," a spokesperson told the APA Agency, revealing that in the accident the 54-year-old broke the upper part of his arm in the accident.

McLaren was amongst the first to send best wishes to the Austrian who famously partnered Ayrton Senna for several seasons, the two becoming firm friends. In 2012 he was appointed President of the FIA Single Seat Commission.

"All at McLaren wish our old pal Gerhard Berger 'get well soon'," tweeted the Woking outfit.