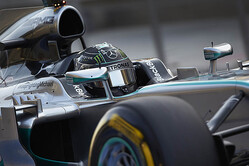 Lewis Hamilton: The Australian Grand Prix is always an exciting race and the fans are fantastic. They love their motorsport, so it's an event that every driver looks forward to. I'm excited about the new season not just as a driver but as a fan. As a fan, you want to see overtaking throughout the field, you want to see different race winners, you want to see the championship go down to the wire... I hope that the changes for this year will make that happen. This is the year you need to watch Formula One! I think we're as ready as we can be for Melbourne and I'm more fired up than ever. With all the changes within the sport and the hard work that's been going on within the team, I believe this can be our year to really show what we're capable of. That's not to take anything away from our opposition, who will be incredibly tough to beat as always, but I feel like I'm equipped with the tools I need to succeed. I can't wait to get started.

Nico Rosberg: I always look forward to the season opener. Melbourne is a fantastic city and Australia is an exciting country all round. It's a great place to start the year and you can always have lots of fun here. The fans are incredibly friendly and laid-back but they are also very enthusiastic and mad about sport. The food is pretty great too! I always fly in a week in advance to get over the jet lag. This year, after completing the final test in Bahrain, I returned to the factory at Brackley for final preparations in the simulator and went straight on to Melbourne from there. Overall, I think our winter testing programme went better than expected. Having said that, the first Grand Prix is the first real opportunity to judge how well we have done against our competition. Pre-season doesn't tell the full story, especially this year with the new regulations. I'm really looking forward to getting the season underway and can't wait to be back in the car again.

Toto Wolff, Head of Mercedes-Benz Motorsport: The new regulations have been a massive challenge for everybody involved, and the team has been pushing flat out to get the car to where it is now as we approach the first race in Melbourne. While it is true that the quickest car with the quickest drivers will win, reliability will be a key factor. We want to bring both cars to the flag in the best possible position. We now face the ultimate reality check in the first race of this new era for Formula One. The feeling within the team is not one of nerves, however. It is more a sense of relief to finally be unleashing our cars in race conditions. Everybody now just wants to get out there and see where we stand. Expectations are high, both internally and externally. Although we're not quite where we want to be right now in terms of a complete package, I'm optimistic in that we've done everything possible to prepare for the challenges ahead. I think people are going to be pleasantly surprised by the new cars: the noise, the speeds and ultimately the lap times. This is cutting-edge technology - and that's exactly what Formula One stands for.

Lewis: I love Albert Park; it's a circuit that really puts drivers to the test. It's a half-and-half mix between street circuit and race track, with a really bumpy surface that's tough on tyres. There are two high-speed sections, but the majority of corners are rated as low or medium speed, so you need to try and put as much downforce on the car as possible. Overtaking is tricky here but not impossible. It's usually pretty close between a move coming off and ending badly, which is why we see a lot of safety cars.

Another factor is the weather, which can be blistering hot one day and freezing cold the next. You really do get four seasons in one day here! There have been race weekends in the past with temperatures in the teens during qualifying, but rising well into the thirties during the race. It can change very quickly, so you have to keep one eye on the forecast and set the car up to be able to cope with every scenario.

In terms of layout, the end of the start / finish straight is the fastest section with quite heavy braking into Turn One. It's so easy to out-brake yourself here and there's always a few tense moments over the course of the weekend as drivers push the limits. You quite often see incidents on the first lap here too as it's pretty tight which, added to the adrenaline of that first race start of a new season, has created plenty of drama over the years.

Turn Three offers the best overtaking opportunity, but it's far from easy to make a pass stick. You have to get a good exit from the first two corners and be brave and decisive when you make your move. Aside from that, it's through the final two turns, 15 and 16, that you really want the car to work best. These are very slow and are where the most lap time can be gained from the car. A good run through here determines your speed down the start / finish straight.

Nico: The circuit at Albert Park is not a permanent race track. Outside of the Formula 1 week, parts of the circuit are used by ordinary traffic. Consequently, the surface is generally very dirty and greasy on the first day of practice and it takes a while before it develops the right amount of grip. It's also essential to take it steady over the kerbs.

In principle, overtaking around the Albert Park Circuit is difficult. This year, however, there should definitely be more opportunities thanks to the boost provided by the two electric motors. For a period of 33.3 seconds per lap, we have an additional 160 horsepower available. That gives you plenty to play with. The best place to try it is through the corner at the end of the home straight. It's possible to pull off some great overtaking manoeuvres there. At Turn One, you put the driver ahead under pressure, then you finish the move at Turn Three. Apart from that, Turn 12 in Sector 3 can also be a key point. This is the fastest corner on the track, and it is especially exciting for spectators watching the race there.

Another factor is fuel consumption, which is relatively high in Melbourne. Managing the new 100 kg maximum fuel allowance this year will play an important role. My engineers have told me that this new fuel limit will be a real challenge at Albert Park. Fuel economy is not just a matter of engine settings; much will also depend on individual driving styles. We have to drive efficiently, which means, for example, coming off the gas at the end of the straights, even before you've reached the actual braking zone.

One special feature of the Australian Grand Prix in Melbourne is the late afternoon start time. Up until the middle of the race, the sun is so low in the sky that you're staring right at it on some of the straights and you're in danger of not seeing the braking points. This is something that complicates the race even further.