Perez leads the way at Sakhir 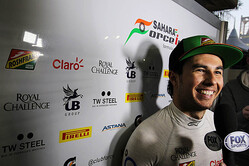 Sergio Perez topped the timesheets today as the final pre-season test got underway.

While the morning session suggested that several teams had put their previous problems behind them, it was soon clear that the issues continue, with Red Bull, Lotus and Toro Rosso still very much on the back foot whilst their Mercedes powered rivals go from strength to strength.

Daniel Ricciardo, who clocked 32 laps in the morning was sidelined for almost the entire afternoon, completing just seven more laps as the RB10 continues to suffer overheating issues. And while there were early baths for Pastor Maldonado (exhaust) and (even) Nico Rosberg, Kimi Raikkonen, who had also lost a lot of track time, made a late re-appearance and improved on his time.

Yet again, the Mercedes powered teams showed pace and reliability, with four drivers in the top six and three completing more than 100 laps.

While Mercedes and McLaren continue to impress, Williams and Force India are both very much in the mix and look sure to capitalise on the misfortunes that look likely to overshadow the Renault powered runners in the early stages of the season.

"We really needed a good day to start this week and today we had it," said a grinning Sergio Perez. "We managed to do a lot of laps, try several different compounds and mappings, and it's been a fantastic day in terms of learning about the car. Tomorrow is my last day in the car before the season starts so hopefully we can have another solid day to be in good shape for Melbourne."

"It has been a very productive day for the team and we managed to complete a high number of laps," added Andrew Green, the Silverstone outfit's Technical Director. "The morning was mainly devoted to working on the tyres, gathering data about the various compounds at our disposal, in addition to a few performance runs to optimise our set-up. We were satisfied with the results of this work, so in the afternoon we switched to longer runs. We were able to do some good long run simulations, which sets us up nicely for the remainder of the week."

At Williams, Valtteri Bottas began the day with aero evaluation then moved on to race simulation and set-up work. Having completed a full race distance the Finn subsequently went out and banged in the second best time of the day for good measure.

"It's been another good day for us," said Bottas. "It was nice to get the whole run plan done. We didn't have any issues all day so well done to all the team for getting the car running so well. We have a lot of data to analyse tonight after doing some aero work this morning and a race distance and set-up work this afternoon. We did some very interesting tests and there are still plenty of things to improve so we'll keep pushing."

"We started the morning by testing some aero components," added Chief Test & Support Engineer, Rod Nelson, "all of which correlated well with what we were expected from the wind tunnel. We then did a race simulation this afternoon including laps to the grid and everything that goes into a race and that also went well. We then completed our programme for today with some new tyre work for Pirelli. Overall, it's been a really good day completing 128 laps."

At Ferrari Kimi Raikkonen was sidelined for much of the morning due to a problem that couldn't be fixed before the lunch break. Once back on track in the afternoon, the Finn managed to run regularly, alternating between aero measurements and a series of set-up tests over short runs.

"We had a small problem today, which limited the number of laps but still managed to learn some new things about the car," said Raikkonen. "You always want to do better, but every team has unexpected things happen and we are still trying to do all we can to be ready for Melbourne.

"During the race weekends there will be little time to try different things in terms of setup, so it was important today to keep on this track to find out what's the best direction to go in. On the final day of the test, we will put everything together that we have learned so far and will concentrate on the conditions we will encounter in the races."