Rosberg ends test on a high, unlike Red Bull and Toro Rosso 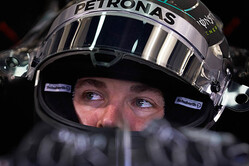 It was another strong day in Bahrain for Mercedes while Red Bull and its sister team Toro Rosso continue to hurt, as do Sauber and Marussia.

Mercedes powered teams filled three of the top four spots at the top of the timesheets, Ferrari once again the only team to give the German power unit manufacturer a run for its money. That said, a crash late in the session for Kimi Raikkonen, due to an unforced error, somewhat marred the Maranello outfit's final day.

There were numerous red flags, two for pace-setter Nico Rosberg, one of them when he stalled his car attempting a practice start, his team subsequently tweeting; "that's what testing is for... we were just testing the marshals were awake."

However, while Mercedes and McLaren continue to assert their pace and reliability, as do Ferrari and Williams - albeit to a lesser extent - the misery continues for both Red Bull and its sister team Toro Rosso.

Once again the Mercedes powered teams completed the most laps 261 (877 miles), more than the Renault (97 laps) and Ferrari (94 laps) teams combined, while a clear pattern is emerging when one studies the best times posted over the course of the four days.

With Rosberg taking over from Lewis Hamilton - who topped the timesheets yesterday - the German team's programme consisted of shorter runs in the morning, followed by a race simulation in the afternoon. Despite the red flag stoppages neither of which were insurmountable, the team is happy with the lap count and the work achieved this week.

"We can be very pleased with the first test in Bahrain this week," beamed Rosberg. "We completed a lot of mileage and learnt more about the car with every lap we achieved. This morning we were able to try some qualifying practice runs which felt good, meaning I could attack the lap a bit as I found a good balance. Later in the day we did a race simulation, which was crucial to learn all the new things in the car. There was a lot of feedback from the engineers, so my head was full of information! We suffered with an issue at the end of the day which ended our programme slightly early.

"There is still some way to go for us to manage the reliability before Melbourne," he admitted, "as this will play a huge factor in the early races, but we're hopeful that we can make another step towards achieving this next week.

"The final day of the test saw us complete some lower fuel runs on softer tyres to get a series of one-lap simulations under our belt," added Paddy Lowe. "We were happy with how the car responded to this programme. We then moved onto a race distance that we were able to complete, albeit with a pause in the middle for a red flag. It was pleasing to be able to complete that amount of running without any problems in the car. We attempted a further test programme at the end of the day but an issue halted that earlier than we hoped, meaning our day ended there.

"It's been a very positive week but we still have a lot of work to do next week to be prepared in time for Melbourne. A great job so far by the whole team trackside and back at Brackley and Brixworth."

Newly engaged Jenson Button was back behind the wheel for McLaren, the Englishman completing 66 laps as his team worked through a range of set-up changes. This week's test has enabled the Woking outfit to develop and refine areas of investigation that were initiated at the Jerez test earlier this month. Ahead of next week's final test the team will update and run the MP4-29 in the specification intended for the season-opener in Melbourne in three weeks time.

Equally importantly, the team completed more than 1600km of largely trouble-free running – an encouraging figure given the important role that reliability will likely play in the opening races.