Hamilton ups the ante on Day 3 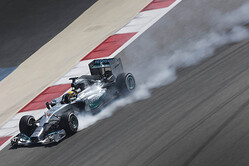 Lewis Hamilton posted the quickest time of the week in Bahrain today as Mercedes powered teams continue to lead the way.

For the third successive day, Mercedes powered cars filled three of the top four spots at the top of the timesheets as the German manufacturer establishes itself as the benchmark in terms of pace and reliability. Between them the four Mercedes powered teams completed 342 laps (1,150 miles), compared to 209 laps (702 miles) for the Renault powered teams and 144 laps (484 miles) for the Ferrari teams.

Over the course of the three days in Bahrain thus far, the Mercedes powered teams have completed 886 laps compared with 505 (Lotus) and 462 for the (three) Ferrari teams.

The works team continued its programme with today's efforts focussed on short runs on the softer tyre in the morning, followed by an attempted race distance in the afternoon. However, a failure on the car interrupted the race simulation; though Hamilton completed another 22 laps once it was fixed.

"It was nice to be able to put together a good lap today because generally speaking there seems to be less grip available than last year," said Hamilton, clearly preparing for the season ahead. "I'm looking forward to completing a race simulation next week as we didn't quite get to finish it today. We're trying to find any issues we can now to prevent them happening during a race situation, so from that perspective it's a positive that we were able to find and fix something again today.

"The car seems to be responding well to my style of driving and the power unit is looking promising, with all of the Mercedes-powered team completing good mileage. We won't know where we are for definite until we get to Melbourne so we're just continuing to focus on our run programmes, keep positive and look forward; the team has done a great job to get where we are today so we just need to keep that going.

"Today was a good day overall," added Paddy Lowe. "We ran a programme in the morning looking at some of the softer tyres, which was very useful to learn a bit more about the car, especially looking at a single lap. We attempted a race distance but suffered a failure that halted this for a while. We did manage to get back out and continued with that until the end of the day to post a good amount of laps. Not a trouble free day, but we learnt a lot about the car from a performance and reliability point of view, so we can come back tomorrow in even better shape."

Jenson Button had plenty to smile about today, not only was he second quickest and the busiest driver - completing 103 laps, including a full race distance - he also announced his engagement to girlfriend Jessica Michibata.

"Today was a really busy session," said Button, "my engineers looked exhausted afterwards, and I've never seen that before! It was good to put some laps on the car without any major issues. We actually did a race distance in the afternoon, and it was nice to do that so early in testing. Still, that session showed us we still have a lot of work to do.

"The thing we really need to focus on is fully understanding fuel-saving, and the communication required between the driver and engineer. I think we'll get on top of things, though, because we're traditionally very good at that.

"We're in a reasonable position: today was positive because we gathered so much information. There's still a lot of work to do before the first race; we'd like to be faster, but when you look at other test days, you'd say we're in reasonable shape."