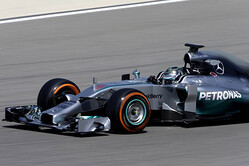 While Lewis Hamilton raised the bar on Friday, posting the fastest time of the week, teammate Nico Rosberg lifted it just a little higher this morning as Mercedes power units continue to prove they are the 'must have' in 2014.

Having said yesterday that it was unlikely the E22 would be on track until late morning, Lotus was as good as its word, Pastor Maldonado finally heading down the pitlane around ninety minutes into the session. However, it was almost another two hours before he posted his first timed lap of the day, such is the air of caution within the Enstone team.

It hasn't been entirely trouble-free for Mercedes either, Rosberg stopping out on track at T2 mid-morning. However, much to the relief of his German team it was nothing serious, he had merely stalled the car after following a practice start. "That's what testing is for," the team tweeted, "we were just testing the marshals were awake."

Other red flags have been caused by Ericsson who has completed only four laps due to an ongoing issue with the Caterham, the Swede handing over to Kamui Kobayashi for the remainder of the day. The third red flag was for Sergio Perez who stopped on track around ninety minutes before the lunch break. Sauber subsequently opting to change the Mexican's chassis having discovered a problem with the monocoque.

Only announced overnight as test and reserve driver, Felipe Nasr is already at work for Williams, the Brazilian completing 54 laps on his way to posting the fourth best time of the morning. The Grove outfit, which has made some impressive sponsorship announcements in recent days - with more to come - mainly focussing on aero work.

The problems continue for Red Bull where Daniel Ricciardo has suffered a power unit issue which has severely restricted his running. While at Marussia their problems also continue, Jules Bianchi having completed just 2 laps thus far.